One of the Immediate Challenges to Hamas 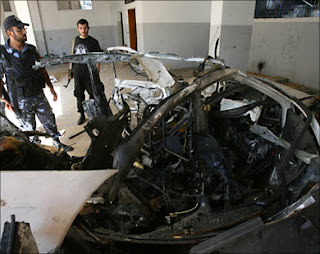 Hamas has displayed both political and military decisiveness in finally putting an end to the Palestinian Contras' plans of spreading "creative destruction" in Gaza in a manner similar to Iraq and to ultimately destroy Hamas politically and militarily. As I said before Hamas had to act and it did.

The swiftness of the Hamas response and its ability to rout the Dahlan Contras in just 3 days illustrated the quality and the discipline of its fighters, as much as it illustrated the hopelessness of Usraeli reliance on Palestinian mercenaries who, when the going got tough simply went home.

A totally new phase is now facing Hamas and it will require the ability to quickly adapt to new conditions and to take advantage of them. The needed strategies will be different in the West Bank and Gaza.

Paradoxically, the conditions in the West Bank are more favorable to Hamas than would appear on the surface. When viewed through the prism of a Fourth Generation War (4GW), the conditions in the West Bank are finally those favoring non-state forces, in this case Hamas. The conditions comprise a direct military occupation by a brutal foreign occupier, a local quisling, doing the bidding of the occupier, who is totally dependent on the occupier for political, military, diplomatic and economic support. The quisling makes no apologies about his open alliance with the occupier and actually joins the occupier in attempting to defeat the popular resistance. The picture is becoming a carbon copy of the occupations of Afghanistan and Iraq.

The task of Hamas, at a certain level, is easier under such conditions. It is true that the restrictions against Hamas are increasing enormously in the West Bank. It is very hard to organize, politicize, raise funds, disseminate information, run charities, etc under such conditions. But the fact that Hamas will be forced to go underground for all of its activities (not just military) is an element of strength. The resistance in Iraq can testify to that.

Therefore the challenge to Hamas is to adapt quickly to these new conditions and not indulge in wishful thinking of restoring "national unity" and going back to the "good old days." The Vichy government of Abbas has declared its decisive rupture and that is good news; he will no longer be able to re-market himself as a Palestinian leader.

Hamas has to learn quickly how to structure all of its activities, on all levels, in a clandestine and far more effective fashion.

The Gaza Strip is different. By definition (or as some suspect by design) Hamas finds itself responsible for the daily life requirements of 1.5 million Palestinians living in the world's largest open-air prison. On the one hand this puts a huge burden on Hamas and will consume a considerable portion of its energy and resources. It is almost an impossible task, with the border crossings controlled by Israel with Egyptian compliance. There are attempts by the quisling Abbas, after consultation with his boss Olmert, to have some "International" force re-occupy Gaza and to restore it to the Vichy government. Hamas has to be ready for the various contingencies.

On the humanitarian level, Hamas should not aspire to meet the daily needs of the 1.5 millions. This is not copping out or abdication of responsibilities. Hamas should not be caught in the trappings of a non-existent state. The secret for the success of national liberation movements is their ability to fight state forces using 4GW tactics of non-state forces. Again a look at Iraq is illustrative: The resistance can't supply the daily needs of the population and carry out the resistance at the same time. Even though the living conditions in Iraq are horrible, that has not reduced support for the resistance; to the contrary the anger of the population is translated into more support for the resistance. The experience of the Viet Cong in Vietnam was similar, so was the experience of the Algerian national liberation movement.

More of the burden should be shifted to UNRWA to take care of the needs of the refugees and pressure should mount on Israel to be burdened with the cost of the real occupation still in effect.

On the military and security levels Hamas should not fall in the trap of acting as a state force. I realize the need for some security forces to ensure law and order, but that is a double-edged sword. Deploying Executive Force elements on the streets with their uniforms and weapons makes them easy targets for Israeli aircraft. As I write these lines, I read that an Israeli missile has just killed 3 more of the forces allied with Hamas. One of the secrets of success of non-state forces is their invisibility and their ability to use the element of surprise rather than being surprised.

It is still possible to ensure safety on the streets without uniforms and arms in full display. Law enforcement can be ensured by police. The real power backing the police should be there but beneath the surface.

Hamas should not be fooled that just because Dahlan and the Contras have been expelled, it is all clear now. The Strip is still full of spies and Israeli eyes in the sky are never far. Therefore, Hamas would be well advised to operate discreetly, even in Gaza.

At one level, Hamas should prepare contingency plans in case Gaza is re-occupied either directly by Israel or indirectly by some "International" force. The planning done by the Iraqi resistance, before and in anticipation of the 2003 invasion, is what made the resistance and its ability to endure possible.

Who knows, in six months or a year's time the Palestinian resistance might very well be operating underground in both the West Bank and Gaza. That would be the best that can be hoped for after the PA and Oslo are buried.
Posted by Tony at 8:02 AM