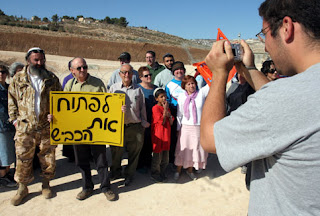 "CAIRO, 28 January (IPS) - Within recent months, several Israeli and US officials have stressed Israel's unique character as a "Jewish state." But according to many Arab observers, the designation negates the right of Palestinian refugees to return to Israel, and leaves the door open to expulsion of Israel's Arab citizens.

"The idea of a 'state for Jews' neutralizes the right of some five million Palestinian refugees to return to what is now Israel," Abdel-Halim Kandil, former editor-in-chief of opposition weekly al-Karama told IPS. "It would also subject Arabs resident in Israel to the possibility of expulsion at any moment."....

Nevertheless, recent developments on the border have led some local commentators to warn of long-standing Israeli designs to resettle Palestinian refugees in Egypt's Sinai Peninsula.

Last week, the border fence separating Egypt from the Gaza Strip was largely destroyed by a series of explosions. As a result, an estimated half a million Gazans -- suffering from a severe Israeli embargo on the territory -- flocked into Sinai to buy essential commodities.

"Israel hopes to exploit the situation ... to bring about calls by the international community for the resettlement of Palestinian refugees in Sinai," editor-in-chief Mohamed Ali Ibrahim wrote in the 27 January edition of official daily al-Gomhouriya. "But Egypt will never allow Sinai to be a part of this devious solution to the refugee problem."

Ultimately, said Thabet, official recognition of Israel as a "Jewish state" per se would not only imperil the future of Israel's Arab citizens, but would also lead to "disastrous consequences" for the entire region.

"Such a move would only encourage notions of religious exclusivity and lead to more conflict and intolerance in the Middle East," he said. "If Israel becomes a nation for Jews only, there will inevitably be calls to establish states exclusive to the followers of other religions as well."
Posted by Tony at 5:08 AM