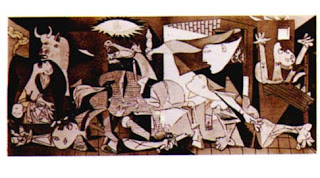 ".....For those who know something about the history of air power, which, since World War II, has been lodged at the heart of the American Way of War, that 100,000 figure might have rung a small bell.

On April 27, 1937, in the midst of the Spanish Civil War (a prelude to World War II), the planes of the German Condor Legion attacked the ancient Basque town of Guernica. They came in waves, first carpet bombing, then dropping thermite incendiaries. It was a market day, and there may have been as many as 7,000-10,000 people, including refugees, in the town, which was largely destroyed in the ensuing fire storm. More than 1,600 people may have died there (though some estimates are lower). The Germans reputedly dropped about 50 tons or 100,000 pounds of explosives on the town. In the seven decades between those two 100,000 figures lies a sad history of our age.

Arab Jabour, the Sunni farming community about 10 miles south of the Iraqi capital that was the target of the latest 100,000-pound barrage, has recently been largely off-limits to American troops and their Iraqi allies. The American military now refers generically to all Sunni insurgents who resist them as "al-Qaeda," so in situations like this it's hard to tell exactly who has held this territory.

At Guernica, as in Arab Jabour 71 years later, no reporters were present when the explosives rained down.....

From Barbarism to the Norm

The air war is simply not visible to most Americans who depend on the mainstream media. In part, this is because American reporters, who have covered every other sort of warfare in Iraq, simply refuse to look up. 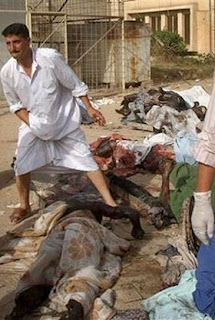 It should be no surprise then that news of a future possible escalation of the air war was first raised by a journalist who had never set foot in Iraq and so couldn't look up. In a December 2005 piece entitled "Up in the Air," New Yorker investigative reporter Seymour Hersh suggested that "a key element of [any] drawdown plans, not mentioned in the president's public statements, is that the departing American troops will be replaced by American airpower. … The danger, military experts have told me, is that, while the number of American casualties would decrease as ground troops are withdrawn, the over-all level of violence and the number of Iraqi fatalities would increase unless there are stringent controls over who bombs what."

After Hersh broke his story, the silence was deafening....."
Posted by Tony at 5:24 AM