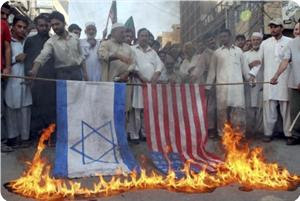 I know that I am going to get a lot of hateful comments for writing this, but bring it on!

I am not an ideologue and I do not belong to any party or a major political current in the Middle East. You could say that I am an Arab and a Palestinian from the proverbial “Missouri” – the show-me-state. I judge movements, leaders and parties by results not rhetoric. As a Palestinian I have learned the hard way that when Arab and Muslim leaders shed tears for Palestine and make thunderous speeches about “liberating Jerusalem,” not to expect any tangible results; to the contrary, to expect the worst from them.

We have just had the so-called international day for Al-Quds (Jerusalem). We heard the speeches and saw the crowds in Iran and Pakistan screaming “death to Israel and America,” and burning Israeli and American flags! In the meantime 1.5 million Palestinians continue to starve in Gaza with the tightest siege in modern history imposed on an entire population. Worse: this siege is actively imposed and supported by a majority of the Arab regimes, while the rest are silent about it.

When I look at what has happened, and is still happening, in the region in general and in Iraq in particular, I see the clear failure, even the death of the two major competing ideologies in the region.

On the one hand we see that the one party, the Ba’th, which preached Arab unity and Arab nationalism, could not even unite one country, Iraq, let alone the entire Arab world. First the two branches of the party (the Syrian and Iraqi branches) fought each other, literally to death. The Syrian regime, together with several other Arab regimes, even sent troops to fight with the invading US troops in 1991, to destroy the Iraqi army. That was the beginning of the end of Arab nationalism.

Then each branch of the party could not and would not create the model state that could be an inspiration for the promised Arab unity and something to inspire and give a boost to Arab nationalism. They instead ruled by an iron fist and by using the policies of divide-and-conquer and encouraging tribalism.

This is not just my point of view. If indeed most Iraqis felt so strongly that they belonged to and benefited from the Ba’th regime and that they had a strong stake in preserving the Iraqi state, why has the majority not fought the occupation? Why, at the earliest opportune moment, major sections of the Iraqi population opted to side with the occupiers and with Iran instead of fighting for Iraq? That tells us something about the prevailing state up until the invasion.

When the US tried to topple Hugo Chavez, and partially succeeded in a coup, millions of poor Venezuelans took to the streets demanding the release of their president. They were ready to fight and die for something they believed in, something they had created, something they had a stake in. That was not the case in Iraq. The majority of the Shiites sided with Iran against their own country and the majority of Kurds decided that they are not Iraqis! So, Iraq is no more; hardly the model of Arab unity to be presented to the rest of the Arabs.

Then we were told that the problem was in Arab nationalism itself, that the Arabs have to transcend this to something higher and that Islam was the answer. The Iranian revolution was to be the vanguard of this new force: the Islamic revolution.

Of course it was not an accident that the two countries spearheading these two major ideologies fought a vicious and bloody war for eight years that killed about a million (Muslims I may add) from each side. We know that the US imperialists wanted both sides to destroy each other, and Henry Kissinger used to say that when one side was getting close to collapse, the US would move in and prop it up to stay in the fight. Kissinger said bluntly, “we want them to kill each other!” But why did the two fools cooperate so well with Kissinger against their own interests?

Just as the US wanted both sides to destroy each other, Iran sought to use the US to destroy the Ba’th regime in Iraq. Let us not mince words about it: Iran encouraged the US invasion of Iraq, it even had its spies (such as Chalabi) fabricate false information about presumed Iraqi WMDs and give this information to the US. Worse still, Iran had its own “Iraqi” militias armed and ready to roll with US tanks into Baghdad. Iran even had its own Grand ayatollah, already planted in Iraq, telling Iraqis not to resist the occupation, but instead to cooperate with it!

Every time there was hope that a broad movement to resist the occupation, representing all Iraqis, might emerge, Iran moved to kill the idea. Iran fully supports the very same puppet, Maliki, who was selected by the occupation! Worse still, he is the one who will sign agreements legitimizing what would amount to perpetual occupation of Iraq.

When I saw Ahmadinejad wining (excuse the expression) and dining with Maliki in the US-defended Green Zone in Baghdad, I could not believe my eyes. This is the same Ahmadinejad who makes those fiery speeches about liberating Jerusalem on Al-Quds day?

Along these same lines I saw the Syrian regime recently establish full diplomatic relations with the occupied Maliki “government;” something it has not done since the eighties. Some Arab unity and some Syrian “steadfastness”!

The reality is that most Muslims are more excited about Danish cartoons than about millions of dying Iraqis or starving Palestinians in Gaza, or a Jerusalem that is being ethnically cleansed at a furious pace. Even the eventual destruction of the Al-Aqsa mosque will not wake up this dead and dying Arab and Muslim “nation.”

For those who will survive they will have to wait for a new force, a new movement. Both Arab nationalism and Islam have failed, and failed badly.