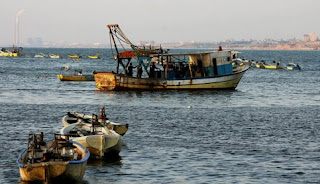 "The Israeli Occupation Forces (IOF) continue to impose a tight siege on the Gaza Strip while escalating their assaults against the Palestinian fishermen and violating their rights. Such practices continue in spite of all Israeli claims to ceasefire, under which all forms of direct attacks will be stopped and the siege imposed on the Gaza Strip will be gradually lifted.

Monitoring work undertaken by Al Mezan Center for Human Rights shows that the siege on Gaza continues along with the worsening humanitarian conditions, human rights status and living conditions of Gaza people. Despite that nearly three months have passed since the announcement of a ceasefire, which took effect on 19 June, nothing tangible has occurred....."
Posted by Tony at 4:32 AM