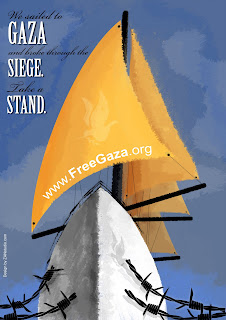 GAZA STRIP (17 September 2008) - An Italian human rights worker with the Free Gaza Movement and International Solidarity Movement was injured today by the Israeli navy while monitoring human rights abuses against Palestinian fishermen off the coast of the Gaza Strip.

Vittorio Arrigoni was hit by flying glass when the Israeli navy used a high-power water cannon against the unarmed boats. The water canon smashed the glass surrounding the steering section of the boat, with shards lacerating Arrigoni's back. He was taken to hospital immediately upon
reaching shore, requiring stitches.

The Israeli navy has imposed severe restrictions on fishing in Gazan waters, regularly attacking any boats attempting to fish over 3 nautical miles. With international accompaniment, fishermen have been attempting to fish their own waters, outside of Israeli imposed limits.

40,000 people in Gaza make a living from the fishing industry, a community that has been decimated both by violent Israeli attacks on unarmed fishermen, as well as through the general blockade of fuel and other needed supplies. According to the Fishing Syndicate in Gaza, fishermen need 40,000 litres of fuel and 40,000 litres of natural gas each day to operate
throughout the high fishing season.