Shifting sands in the Arab world 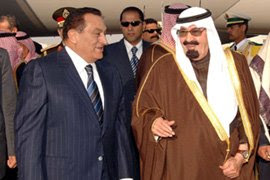 It is apparent that Saudi Arabia, with hindsight, feels the need to regain control of a role it had allowed to slip, and appear to speak in the name of a somehow cohesive Arab world, and an Arab cause beginning with Palestine.

As popular grief turned to anger while footage from Gaza filled television screens, Saudi media was eventually pushed into a more extensive coverage of the war and a more public response.

Regaining the cloak of Palestinian defence is the next logical step for the Saudis....

Saudi Arabia also wishes to reach a collective position on the Arab Peace Initiative of 2002, declared dead by the Syrian president during the mini-summit in Doha.

If, however, there are plans to affirm that rumours of its death have been exaggerated but that a time limit will come into effect, Saudi Arabia needs the consensus of all Arab leaders, and the Riyadh reconciliation is also a step in that direction......

.....With explosive situations in Palestine and Iraq, unresolved issues in Lebanon, uncertain futures for the political leaderships of countries preparing for change, a hint of worsening conflict in nearby Afghanistan, and a global recession hitting the financial stability of even successful oil states, Saudi Arabia has a lot of catching up to do if it is to regain any perception of leadership and the power to influence multiple regional parties - even when accounting for damage that cannot be undone and for the personal animosity that has developed between certain leaders.

The fact remains that new alignments will undoubtedly continue to change the shape of regional politics, and that the days of the Saudi-Egyptian-Syrian axis are definitely over.

Qatar's apparition as a power broker, benefiting from a multitude of good connections regionally and internationally, is not going to be an easy act to follow, even assuming that it were about to relinquish its post. Just like Turkey, which has emerged on the scene extending a hand of partnership in its own neighbourhood while simultaneously cultivating its ties outside the Arab world, including with Iran, Qatar has found itself on a political pedestal, using its ties wisely and truly developing a new vision for the region after setting the pace in the media sphere...... "
Posted by Tony at 7:03 AM