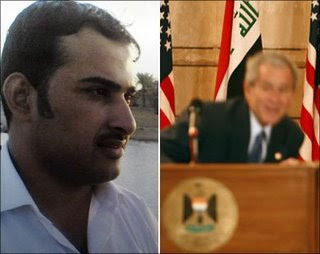 "It’s remarkable how some in the media can cleverly manipulate a story by avoiding its essence and focusing on marginal details. The chucking of a pair of shoes at former President George W. Bush by an Iraqi journalist, Muntazer al-Zaidi during a Baghdad press conference, on December 14, 2008 is a case in point.

Most Arab and Muslim media – and other media around the world, save mainstream western media – framed al-Zaidi’s deed within its proper context, that of a horrific, genocidal war, bloody and humiliating occupation and the colonial hubris of a superpower that gave itself the right and ‘moral’ justification to devastate a sovereign nation for the sake of oil, Israel and the desire for sheer hegemony.......

Al-Zaidi’s action was reduced in mainstream media, perhaps because he was an Iraqi fighter of a different type, the kind that fails to fit the media’s stereotype, that of the sectarian militant, blowing people up, gunning them down, or detonating their homes and houses of worship. Indeed, al-Zaidi didn’t only challenging Bush, the occupation and the quisling government of Iraq, but the media perception itself.

The true story, conveniently missed or reinterpreted by many in the media, was not about a pair of shoes, but a pair of narratives, that of the Iraqi court and the government it represents – compromising, self-serving and sectarian – and that of Muntazer al-Zaidi and the people he represents, occupied and oppressed, true, but daring, and exceptionally proud. "
Posted by Tony at 6:12 AM