Not an analogy: Israel and the crime of apartheid 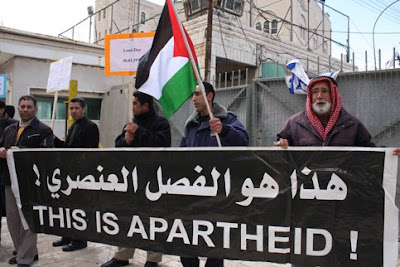 By Hazem Jamjoum, The Electronic Intifada, 3 April 2009
(Hazem Jamjoum is the editor of al-Majdal, the English language quarterly magazine of the Badil Resource Center for Palestinian Residency and Refugee Rights in Bethlehem, Palestine.)

".....Many of the writings stemming from this analysis work to detail levels of similarity and difference with apartheid South Africa, rather than looking at apartheid as a system that can be practiced by any state. To some extent, this strong emphasis on historical comparisons is understandable given that boycott, divestment and sanctions is the central campaign called for by Palestinian civil society for solidarity with the Palestinian liberation struggle, and is modeled on the one that helped end South African apartheid. However, an over-emphasis on similarities and differences confines the use of the term to narrow limits. With the expanding agreement that the term "apartheid" is useful in describing the level and layout of Israel's crimes, it is important that our understanding of the "apartheid label" be deepened, both as a means of informing activism in support of the Palestinian anti-colonial struggle, and in order to most effectively make use of comparisons with other struggles.

Colonialism and the role of comparison

I have argued that the question of whether apartheid applies cannot be determined by means of comparison with South Africa, but rather by legal analysis. This, however, does not mean that comparative study is not useful. Comparison is in fact essential to the process of learning historical lessons for those involved in struggle. A central point of comparison with South Africa is the fact that it was, and for the indigenous people of Palestine and the Americas, continues to be a struggle against colonialism.

Focusing on the colonial dimension of Israeli apartheid and the Zionist project enables us to maintain our focus on the issues that really matter, such as land acquisition, demographic engineering and methods of political and economic control exercised by one racial group over another. Comparison with other anti-colonial struggles provides the main resource for understanding this colonial dimension of Israeli oppression, and for deriving some of the lessons needed to fight it......

The push for the establishment and international recognition of an independent Palestinian state within the Palestinian Bantustan is no different from the South African apartheid regime's campaign to gain international recognition of Transkei or Ciskei. This is the core of the "two-state solution" idea. The major and crucial difference is that in the current Palestinian case, it is the world's superpower and its adjutants in Europe and the Arab world pushing as well, and armed with the active acceptance of Palestine's indigenous intermediaries."
Posted by Tony at 7:26 AM