The One World Leader With Guts to Call it as it is; Yes, Hugo Chavez! Viva Chavez!! 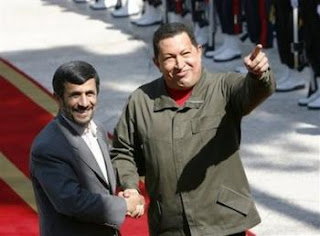 "TEHRAN - Venezuelan President Hugo Chavez said Wednesday that he has little hope of better relations with Washington under President Barack Obama, saying the United States is still acting like an "empire" in his eyes.

Chavez made the comments after arriving in Tehran on a two-day visit to Iran. In recent years, Chavez and Iran's hard-line President Mahmoud Ahmadinejad - both well-known for their anti-U.S. rhetoric - have boosted economic and political ties....."
Posted by Tony at 6:04 AM