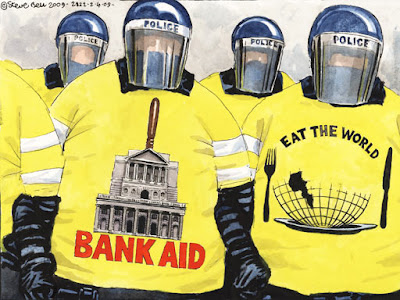 It's hardly surprising that some want to trash the City, but to claim that the G20 protesters have no alternative is nonsense

"When mass protests exploded on the streets of Seattle in 1999 against the kind of globalisation embodied in the World Trade Organisation, their anti-capitalist message was widely portrayed as utopian. A decade on, as anti-capitalist demonstrators vented their fury yesterday on the social and ecological vandals of the City and prepared to do battle today outside the G20 meeting in the heart of what was once London's docks, it looks more like common sense.

The wreckage of the neoliberal order - which reached its zenith in the wake of Seattle and has generated the greatest global economic crisis since the 1930s - is now all around us. World trade is in free fall and, by some measures, collapsing faster than at the time of the Great Depression........"
Posted by Tony at 2:47 AM