The Smooth Criminal Transition from Bush/Cheney to Obama 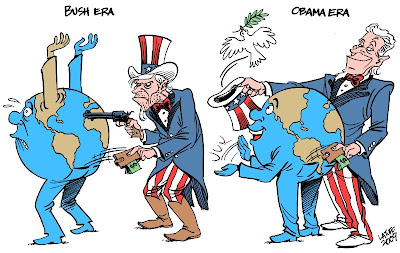 "To sober, clear-eyed observers of history and political deception, the ascension of Barack Obama held the promise for unprecedented new dangers: a revitalized New World Order, led by the Anglo-American empire’s neoliberal criminal faction and an iconic, deceptive new facilitator; and a continuation of Bush/Cheney criminality and war, under smarter and much more effective management.

Now, just months into their tenure, the Barack Obama administration has more than fulfilled the promises he made to his elite constituency, deepening the mass destruction of Bush/Cheney, while charming its victims all over the world into enjoying their own demise.

Beneath his seemingly boundless charisma and charm, Barack Obama has always been an utterly ruthless politician. He has been a compromiser who has danced with the darkest forces of political and criminal power, while winning over common people; a consensus-abiding chameleon and a “pragmatist”. Obama is the true model of what George W. Bush only claimed to be: “a uniter, not a divider”......

A call to resist

“…the arrival of Obama as the new imperial figurehead of the Anglo-American empire is not a victory of, or for, the people. It will not signify a dramatic upheaval, in any way, and by no means is any sort of revolution at hand. This election was a necessary rotation of management, scripted at the highest levels of the Anglo-American elite.

“The “change” that a Barack Obama presidency will bring to America and the world will be one of style, not substance: a return to the centrist corporate globalism of the Clinton and Carter eras, complete with regurgitated Democratic Party elites from those administrations, and new neoliberal politicians touting similar ideologies.

“…The velvet gloves will be slipped back over the iron fists, but the fists will still be wielded aggressively. Within months, the global conquest that Bush-Cheney started will resume under the vastly more convincing and adored Obama, who has consistently stated his intention to intensify the war in Afghanistan, and “kill ‘terrorists’” across the Middle East.”

For those who have spent the past eight hellish years opposing and resisting the crimes of Bush/Cheney, prepare yourselves for worse: the “friendliest” fascism, and the most dangerous stealth messenger in history. "
Posted by Tony at 7:58 AM