Afghans to Obama: Get Out, Take Karzai With You 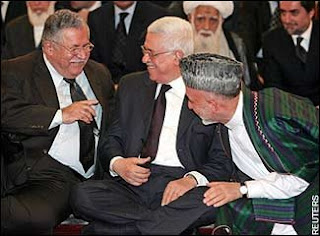 "They Can't Even Protect Themselves, So What Can They Do For Me?"

".....Karzai is also to deliver a speech at the Brookings Institution think tank on “effective ways of fighting terrorism.”

The title of his lecture shows a certain cheek. Karzai’s seven years in power since the overthrow of the Taliban in 2001 have been notable for his failure to prevent their resurgence. Suppose the president’s motorcade this week had taken a different route and headed, not for the airport, but for the southern outskirts of Kabul, he would soon have experienced the limits of his government’s authority. It ends at a beleaguered police post within a few minutes’ drive of the capital. Drivers heading for the southern provincial capitals of Ghazni, Qalat and Kandahar nervously check their pockets to make sure that they are carrying no documents linking them to the government......
.....It was Karzai’s dysfunctional state of warlords and criminals which opened the door for the Taliban’s return."
Posted by Tony at 8:51 AM