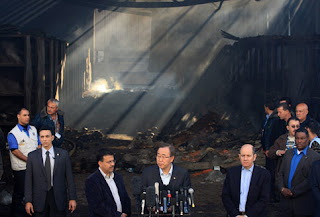 (Left) UN Secretary-General Ban Ki-moon at a press conference in Gaza City outside the UN headquarters, still smoldering from the Israeli bombardment of the facility, 20 January 2009.

".....The brief news item stated that the UN report contained secret information supplied by Israel about an incident in which more than 40 Palestinian civilians were massacred when Israeli shells fell "outside" a UN school where many Palestinians were taking shelter. The secretary-general is reportedly considering how much of the information he can release without revealing the information supplied by Israel, the news item said, adding that the UN report concluded that Hamas fighters were not inside UN buildings but close to them.

Commenting on the report, the BBC said that it was informed by a diplomatic source, that the United States has informed Ban's office that the report should not be published in full due to the damage that that could cause to the Middle East peace talks; in other words (mine, in fact) to Israel......

For Ban, then, Israeli bombing is good -- although he would like perhaps to see a little bit less. But, in tune with his political masters, he considers Palestinians to have no right to any form of self-defense against the Israeli occupation, constant aggression and the Israeli, internationally-supported, deadly siege, with whatever means they have at their disposal......

In Sderot, Ban also urged Israel to end its crippling blockade on Gaza, but not because the blockade is a flagrant violation of international law, the Geneva conventions, inhuman and wrong. He worried only that the blockade would strengthen Hamas; otherwise, like a measured dose of bombing, it would be perfectly fine.....

....But Israel has repeatedly attacked UN facilities, schools, peacekeeping forces and personnel in Palestine and Lebanon knowing full well that it, not the UN, enjoys immunity for its actions. The next time Israel attacks a UN facility, part of the responsibility will lie with those who failed to act correctly this time around."
Posted by Tony at 6:09 AM