'Business as usual' in Middle East 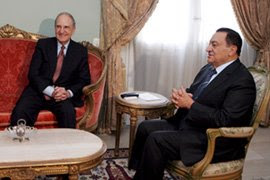 If the peace process is one of the most important priorities of the US administration, and its successful conclusion can "only" occur with Mubarak at Egypt's helm, then the clear message to the Egyptian president and his people is that he has a green light from Washington to do whatever is necessary to maintain his power, regardless of the cost to Egyptians and the possibility of tangible democratic change in the country.

Either way, Mitchell's remarks can only be read as a slap to the face of the many brave Egyptian activists for democracy, who continue to be harassed, jailed, and often tortured for pursuing the dream of genuine democratic development that Obama's election has symbolised for the world.

Indeed, just before Mitchell's arrival in Cairo in April, Egyptian security forces questioned well-known blogger Wael Abbas after he and his mother were assaulted in his home by police.....

And just as the Egyptian government tries to silence its own bloggers, it also is quite wary of allowing Gazans to offer unvarnished views of the conditions in which they are forced to live, in good measure because of the regular restrictive border closing by the Egyptian government and its intelligence co-operation with Israel.

At roughly the same time that Wael Abbas was assaulted, the Gaza-based blogger and journalist Laila El-Haddad was detained at Cairo airport upon her arrival from Washington, where she was kept in detention for over a day with her two young children before being expelled from the country and sent back to the US, despite having written permission from the Egyptian consul-general in Washington to cross the border into Gaza.

In the context of this struggle Mitchell's remarks send a signal, both to Israeli and Palestinian leaders, and to the peace activists in both communities struggling desperately against their policies, that business will continue as usual under the Obama administration when it comes to Egypt, Israel, the occupation, and the larger geopolitics of the region......."
Posted by Tony at 3:40 AM