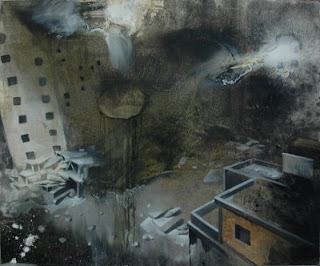 Painting and description by: Luke Kendall

when a building is disassembled, you lose its facade and its very structure is revealed, you see what it is made up of.

The same can be said of when countries decide to partake in strategies such as the ‘Dahiya strategy’: it removes the facade and the PR illusions, and reveals the true values of a country. Values are an essential component of conflict, and it can tell you alot about what a country stands for.

the painting is named after a military strategy approved by the israeli military, which is basically to use disproportionate military force against countries it considers it’s enemy. When implemented in Dahiya, the objective was to completely level a number of high story apartment blocks during the 2006 Lebanon war, with no regard to civilian casualties or world opinion.

The events that happened in Dahiya weren’t accidental, or a breakdown in communications, it was a calculated strategy that was monstrously executed, as a warning that israel knows no limits to what it is prepared to do in ’security’ actions.