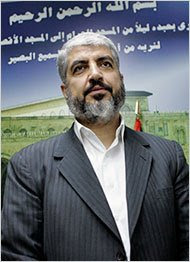 "DAMASCUS, Syria — The leader of the militant Palestinian group Hamas said Monday that its fighters had stopped firing rockets at Israel for now. He also reached out in a limited way to the Obama administration and others in the West, saying the movement was seeking a state only in the areas Israel won in 1967.

“I promise the American administration and the international community that we will be part of the solution, period,” the leader, Khaled Meshal, said during a five-hour interview with The New York Times spread over two days in his home office here in the Syrian capital......."
Posted by Tony at 6:14 AM