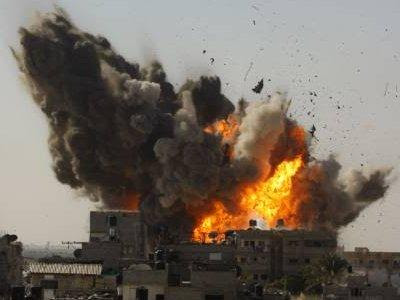 'Israel's fascist foreign minister is of the opinion that Gaza should've been nuked.'

By Dr. Haidar Eid - Gaza
(Dr. Haidar Eid is Associate Professor in the Department of English Literature, Al-Aqsa University, Gaza Strip, Palestine. Dr. Eid is a founding member of the One Democratic State Group (ODSG) and a member of Palestinian Campaign for the Academic and Cultural Boycott of Israel (PACBI).)
Palestine Chronicle

"Gaza has returned to its pre-massacre state of siege, confronted with the usual, conspiratorial, "international" indifference after 22 long days and dark nights, during which its brave people were left alone to face one of the strongest armies in the world -- an army that has hundreds of nuclear warheads, thousands of trigger-happy soldiers armed with Merkava tanks, F-16s, Apache helicopters, naval gunships and phosphorous bombs. Gaza now does not make news. It's people die slowly, its children malnourished, its water contaminated, its nights dark, and yet it is deprived even of a word of sympathy from the likes of Ban Ki Moon and the president of "Change; Yes We Can."

Israel could not have carried out its genocidal war, preceded and followed by a medieval, hermetic siege, without a green light from the international community. During the massacre, one Israeli soldier commented: "That's what is so nice, supposedly, about Gaza: You see a person on a road, walking along a path. He doesn't have to be with a weapon, you don't have to identify him with anything and you can just shoot him."......"
Posted by Tony at 3:44 AM