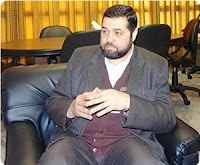 "BEIRUT, (PIC)-- Osama Hamdan, the representative of the Hamas Movement in Lebanon, has asked the Arab countries to drop the Arab peace initiative rather than drop the Palestinian refugees' right of return as demanded by Israel and the American administration.

He told Al-Quds TV satellite channel on Thursday that the Arab countries should rather support resistance that could lead to changing the Israeli occupation authority's' stands.

Hamdan said that Hamas absolutely rejects any tampering with the right of return, which, he said, is a matter involving millions of Palestinians within and outside Palestine.

He expressed surprise at the Arab insistence on the peace initiative despite the Israeli rejection of it, noting that the new Israeli coalition government is based on refusing negotiations on Jerusalem and continuation of the settlement and building of the separation wall.
If the Arabs agreed to drop the right of return Israel would ask for dropping more Palestinian rights and find legal formulas to market them, the Hamas leader underlined........"
Posted by Tony at 6:30 AM