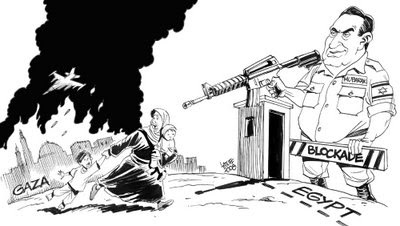 "04/05/2009 Egyptian President Hosni Mubarak and Israeli Prime Minister Binyamin Netanyahu will discuss major threats facing the region and their overall vision for the Middle East during their planned meeting in Egypt, which will likely take place next week, an Egyptian official said on Sunday.

The two men are expected to discuss a range of topics including Iran, "how to work together to bring peace and stability to the region," and negotiations over captive Israeli soldier Gilad Shalit [COMMENT: Obviously, Cairo is more concerned about Shalit than Tel Aviv], the official told The Jerusalem Post on the condition of anonymity. "We would like to see if there is anything new concerning the Israeli vision about Gilad Schalit," he said.

As for a possible Israeli air strike on Iranian nuclear facilities, "We think sanctions are a better option; we don't prefer the military option right now," the official said.

Containing Iran's influence in the region and its nuclear capabilities are top concerns for many US-backed Arab states such as Egypt and Saudi Arabia.

An Israeli government official confirmed that Netanyahu would meet with Mubarak, and then go to Washington to meet with US President Barack Obama.

Netanyahu's talks with Mubarak - the first Arab leader he will meet since taking office on March 31 - "demonstrates the importance we attach to our relationships with Egypt and the more pragmatic Arab countries," an Israeli official said......"
Posted by Tony at 3:58 AM