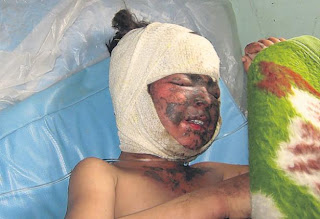 As rage spreads in Afghanistan after US bombing that killed up to 130 people, unnamed Pentagon officials are spinning another cover-up. Defiant Obama moves ahead with troop increase.

" As President Barack Obama prepares to send some 21,000 more US troops into Afghanistan, anger is rising in the western province of Farah, the scene of a US bombing massacre that may have killed as many as 130 Afghans, including 13 members of one family. At least six houses were bombed and among the dead and wounded are women and children. As of this writing reports indicate some people remain buried in rubble. The US airstrikes happened on Monday and Tuesday. Just hours after Obama met with US-backed president Hamid Karzai Wednesday, hundreds of Afghans — perhaps as many as 2,000 — poured into the streets of the provincial capital, chanting “Death to America.” The protesters demanded a US withdrawal from Afghanistan......."
Posted by Tony at 11:32 AM