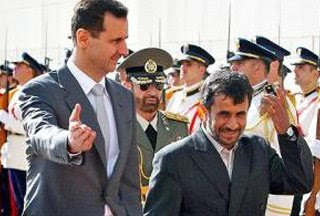 "The Derail Veolia and Alstom Campaign, operating in full coordination with the leadership of the Palestinian Boycott Divestment and Sanctions National Committee (BNC), is in full swing. After Iranian President Mahmoud Ahmadinejad criticized Israel in Geneva, the BNC called on Iran to cut its business ties with Veolia Environment and Alstom. The French transportation giants are involved in the Israeli light rail project in occupied Jerusalem, linking the city with the illegal settlements on Palestinian land. Veolia and Alstom are playing a key role in Israel's attempt to make its annexation of Palestinian East Jerusalem irreversible......

The BNC is the major voice of Palestinian civil society, unifying a broad spectrum of more than 170 Palestinian non-governmental organizations, political parties and trade unions that have endorsed the July 2005 Call for Boycott, Divestment and Sanctions (BDS). Iran could give substance to its criticism of Israel's practices towards Palestinians by acting upon the call of the Palestinian BNC to "take the necessary steps to ban Veolia and Alstom and their subsidiaries from any contracts and operations in the country." According to the Tehran Times, the Tehran Municipality and Veolia agreed to collaborate on the implementation of some projects concerning the environment and the development of the urban transport system. Alstom has a headquarters in Tehran and received a number of large contracts, including a 192 million euro contract with Iran's state railways in 1999 and a larger 375 million euro contract to supply 50 turbo compressors to Iran in 20........"
Posted by Tony at 6:41 AM