US General Builds A Palestinian Army 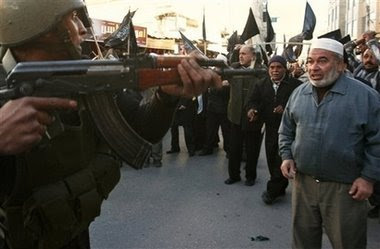 One of the Palestinian Thugs Trained by Dayton to Suppress Any Palestinian Resistance, Confronting Palestinians in Al-Khalil.

by Robert Dreyfuss
The Nation

"Last Thursday, in what was billed as his very first on-the-record address, Lt. Gen. Keith Dayton [Abbas' immediate boss, in effect], U.S. security coordinator for Israel and the Palestinian Authority, spoke to the 2009 Soref Symposium organized by the Washington Institute for Near East Policy. WINEP, of course, is the chief thinktank for the Washington-based Israel lobby.

And in his talk, Gen. Dayton delivered an important warning.....

From the detailed description provided by Dayton, it's clear that the Palestinian forces he's enabling could certainly be accused of carrying out the self-policing of the West Bank for the Israelis. Because the West Bank is, after all, occupied by Israel and riddled with illegal settlements besides -- plus beset by a surrounding wall, 600-plus intrusive checkpoints, and a network of Jews-only highways -- the Palestinian troops are utterly at the mercy of the Israelis. Each recruit is vetted by US security forces (i.e, the CIA), then vetted by Shin Bet, the domestic intelligence arm of Israel, and then by Jordan's super-efficient intelligence service, before they begin their training in Jordan. Dayton made it quite clear that the Palestinian units thus trained are primarily deployed against two targets in the West Bank: against criminal gangs, and against Hamas.....

Dayton was responding to a question from Paul Wolfowitz, the neoconservative former deputy secretary of defense, who now hangs his hat at the neocon-dominated American Enterprise Institute. "How many Palestinians see your people as collaborators?" Wolfowitz asked......"
Posted by Tony at 9:03 AM