More on the Torture to Death of Haitham Amr 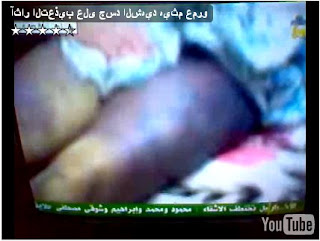 "......Initially, a PA security spokesman said Amr killed himself by jumping from the third floor of the Mukhabarat headquarters. However, it was clear that this story had no credibility and was mainly intended to cover up the real story, namely that the man was actually tortured to death at the hands of the Mukhabrat interrogator.

Amr’s family initially demanded that an autopsy be performed on his body in the Israeli forensic institute known as Abu Kabir to rule out possible “foul play” by PA security elements, e.g. bribing or coercing doctors to falsify the autopsy report. Eventually, however, Fatah leaders and PA officials convinced the victim’s father to perform the autopsy at al Quds University medical college in Abu Dis near Jerusalem, assuring him that no foul play would be allowed.

However, as of this time (Thursday afternoon, 18 June), no autopsy report has been released, which might suggest that the PA has some thing to hide from the public.
This also explains PA efforts to prevent the media from covering the story and especially filming the body, which bore clear scars of torture especially in its lower parts.
On Monday, 15 June, members of the Preventive Security Force (PSF) detained an Al-Jazeera TV crew after filming the body shortly before the burial rites at Amr’s home village. The PSF men confiscated the crew’s cameras and recording equipments, and also detained correspondent Wael al Shoyoukhi for several hours. The equipments were returned to the crew hours later after the videotaped materials showing the scars of torture had been erased.......

There have been certain rumors that the Fatah movement was seeking to strike a deal with the bereaved family whereby the family would cede its right to pursue the killer in return for an undisclosed amount of money. However, the family vehemently denied these rumors, saying “the blood of our son was not for sale.”

The PA has been clearly embarrassed by the murder for several reasons. First, the victim’s father and many of his immediate relatives are veteran Fatah activists and many of them are actually members of the PA security agencies. Indeed, the head of the interrogation department at the General Intelligence in Hebron is a distant cousin of the victim.......

This prospect would complicate the operations of the PA security apparatus, especially interrogators involved in torturing Hamas’s detainees. The rationale is that interrogators would start feeling that the PA would protect them if the harsh interrogation tactics they employ led to the death of the person being interrogated, as was the case with Haitham Amr and several others victims.

Similarly, the PA can’t just fabricate a denial of any wrong doing since this would convince nobody, including the victim’s family, which is generally affiliated with Fatah.

Hence, it is highly likely that the PA security agencies will let the case die down......

However, it is amply clear that torture, even harsh torture, is still widely practiced by some PA security agencies.

According to observers in Occupied Palestine, a key reason contributing to PA flaccidity and ostensible indifference concerning the ostensible rampancy of torture and other human rights violations in the West Bank is that western powers, upon which the PA depends for its financial survival, have shown little or no concern over this matter. "
Posted by Tony at 4:11 AM