Fatwas For Hire: Tantawi and Leading Egypt Clerics Back Gaza Tunnel Barrier. This is Islam in the Service of Dictators. 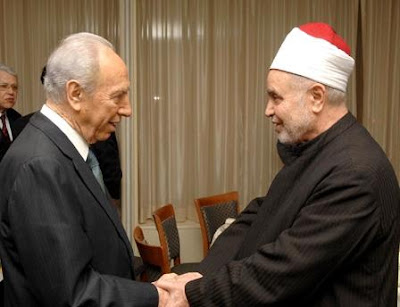 This "Fatwa" comes from a liar, who after meeting the war criminal Shimon Peres, and shaking his hands, claimed that he did not know who Peres was!

"A council of leading Muslim clerics has supported the Egyptian government's construction of an underground barrier along the border with Gaza to impede tunneling by smugglers, a report said on Friday. The Islamic Research Council of Al-Azhar University, Sunni Islam's highest seat of learning, said that the tunnels were used to smuggle drugs and threatened Egypt's security, the Al-Masri Al-Yawm newspaper reported......

"Those who oppose building this wall are violating the commands of Islamic law," they added, after a meeting attended by Egypt's top cleric Sheikh Mohammed Said Tantawi, who is a government appointee......."
Posted by Tony at 6:41 AM