How the PA helps Israel occupy 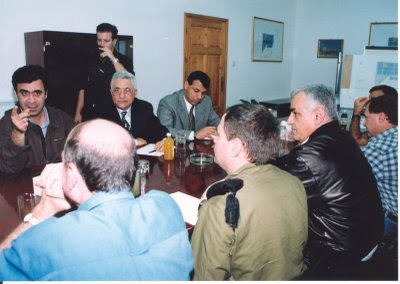 "Since the Palestinian Authority's initial diplomatic disaster over the Goldstone report, it has switched into reverse gear, issuing a barrage of condemnation of Israeli occupation and rhetorical flourishes for Palestinian justice. However, suspected links between PA security forces and the assassination of Hamas's Mahmoud al-Mabhouh, together with strengthening cooperation between PA security and the Israeli military in the West Bank, reflect a far different reality for Palestinians living under occupation.

Israeli invasions of PA territory have increased since the summer, hitting Ramallah regularly for the past few months to arrest popular struggle leaders and international solidarity activists, and raiding the offices of grassroots anti-occupation movements. While usually it is impossible to go more than two blocks in the West Bank Palestinian political centre without seeing armed PA forces, when the Israelis come into town, they are ordered back to their barracks and are nowhere to be seen. I witnessed this countless times while living in Ramallah......

...the basis of power rests in the hands of the western countries keeping Abbas financially and militarily afloat. At the same time, Israel recognises the advantage of a policing partner in the West Bank that fuels internal Palestinian division, tolerating the rhetorical flourishes volleyed over the wall.
Regardless of what Palestinians call for, provided that the rhetoric and guns remain enough to appease or silence the West Bank, both the PA and Israel have an interest in maintaining a form of status quo and playing their parts in managing the occupation."
Posted by Tony at 2:36 PM