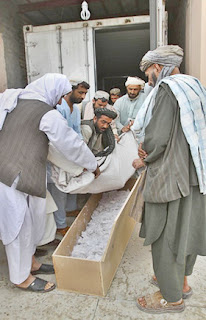 "A Special Operations Forces raid on Feb. 12 on what was supposed to be the compound of a Taliban leader but that killed three women and two Afghan government officials demonstrated a fatal weakness of the U.S. military engagement in Afghanistan: after eight years of operating there, the U.S. military still has no understanding of the personal, tribal, and other local sociopolitical conflicts.

In targeting the suspected Taliban in such raids, therefore, the U.S. military command has been forced to rely on informants of unknown reliability – and motives....

Alston reported that a "senior official" who responded to his critical report did not deny that "feuds" drive much of the identification of local Taliban officials. Instead the official suggested that such "feuds" were simply "part and parcel of the conflict between the Taliban and the government."

Instead of admitting that U.S. intelligence was fatally flawed, the U.S. military command had simply adopted a justification that did not require any real understanding of the society.

McChrystal, on the other hand, has lamented that ignorance but continues to authorize raids that are based on the faulty intelligence it generates."
Posted by Tony at 3:50 AM

Having different favors for men and women can be a good way to go if you can't decide on something that is universal
for both sexes. Lastly, they should have experience shooting the wedding itself.
It seems like a simple task, but capturing that special day with wedding photography is more difficult than you may
realise.