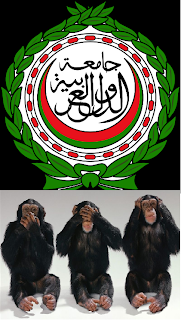 "The Syrian regime's refusal even to pretend to implement last week's peace "road map" has provoked a portentous response from the deal's diplomatically challenged progenitors, the Arab League. "The failure of the Arab solution will have disastrous consequences in Syria and the region," the 22-nation organisation's secretary general, Nabil el-Araby, warned. What Araby did not say is that the apparent collapse of the initiative, only days after its launch in Cairo last week, is a potential catastrophe for the league, which was forced to call an emergency meeting after further deaths on Sunday.....

The Arab League faces a momentous, possibly make-or-break decision. To avoid a big split involving the likes of Iraq, it either goes on pretending a peace process is in place and the regime is genuinely engaged – at the risk of destroying what little credibility it has left. Or it takes the courageous step of expelling Syria, one of the league's six founding members in 1945, imposing additional, punitive sanctions – and in effect sending a message to the west that Arabs cannot manage Arab problems.

There is a third option, of course: collective Arab military intervention to bring Assad to book. Sadly, this sort of Lawrence of Arabia fantasy is out of fashion."
Posted by Tony at 3:38 AM