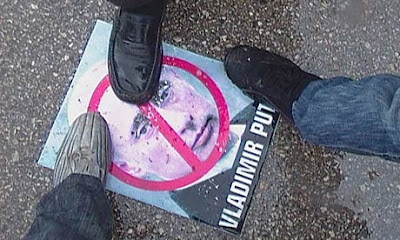 "The Russian government has said it is sending two planes to Lebanon to evacuate Russians from Syria, the first such effort since the uprising against Bashar al-Assad began in March 2011.

The emergency situations ministry said two of its planes would fly to Beirut on Tuesday to bring home more than 100 Russians.

The announcement appears to reflect Moscow's increasing doubts about Assad's ability to cling to power and growing concerns about the safety of its citizens. Russia's foreign ministry has said it has contingency plans in place to evacuate thousands of Russians from Syria.

Russia has been the main ally of Assad since the start of the conflict, using its veto power at the United Nations security council to shield the Syrian president from sanctions.

On Monday the secretary general of the Arab League, Nabil Elaraby, said the mission of the international envoy tasked with resolving Syria's crisis had yielded not even a "flicker of hope".
Addressing the opening session of a two-day Arab economic summit in Saudi Arabia, Elaraby proposed that the gathered heads of state call for an immediate meeting of the UN security council to adopt a resolution demanding a ceasefire in Syria and a monitoring force to ensure compliance.
Algeria's Lakhdar Brahimi took up the post of international envoy on Syria late last summer but has made no headway in resolving the conflict."
Posted by Tony at 2:01 PM