What is the future of the Palestinian national movement? Ghada Karmi, Ilan Pappe, Ali Abunimah and other experts discuss the unity deal and failure of negotiations with Israel.

Al Jazeera Round Table
Posted by Tony at 8:59 AM No comments:

Nabeel Rajab: The problematic success of 'human rights' in the Arab world

The recent string of “elections” across the Arab world raises profound questions about the Arab world’s apparent difficulty in adopting institutions and practices of liberal pluralistic democracies.
But is the problem really about the ability of Arab social values to accommodate democracy, or is there a deeper problem related to the clumsy nature of statehood that has emerged in this region during the past century?
The “elections” I refer to include spectacles in Algeria, Egypt, Syria, Iraq, and the Lebanese presidential election-selection that was not even held on time due to political bickering among the country’s sectarian leaders. The Egyptian, Syrian and Algerian cases repeat the ugly legacy of the modern Arab tradition of family-run security states and dictatorships that put on a show of voting to secure approval ratings of 87 or 93 or 97 percent, complete with adoring crowds of supporters of the “Great Leader.”
Why do Arab autocrats try to legitimize their life-long rule, despite the total lack of credibility of the “elections” they hold? Nowhere in the normal world do elections result in victories of such magnitude as routinely occur in Arab “elections.” But parliaments in these lands have little substance, because real power is vested in the family or soldiers who run the country. (The only comparable unnatural phenomenon I know of is the almost unanimous support for pro-Israel resolutions in the U.S. Congress, which probably reflects a similar dynamic at play, in other words you vote “yes” for the Arab president or the pro- Israel resolution, or you lose your seat.)
The Lebanese and Iraqi cases are different, but equally problematic. Iraq’s elections resulted in a more natural distribution of gains among the competing political parties. The problem here is that the electoral system initiated by the U.S.-run transitional authority after the Anglo-American war on Iraq in 2003 has been built on a foundation of deep sectarianism, so the election results in parliament mirror the sectarian tensions, mistrust and cleavages in Iraq. Consequently, the Iraqi parliament and government as a whole have been largely dysfunctional institutions that have struggled for the past decade to provide services and security throughout the country, often without success.
The Lebanese case is also a fascinating example of electoral institutions that allow citizen participation in governance, but do not, in fact, impact deeply on decision-making. The sectarian-based Lebanese system has operated for some years now on the principle that a broad national consensus must be reached on major policy decisions, and a simple majority in parliament is not enough. Such consensus is usually generated at late-night dinners at the homes of sectarian leaders who also head political groupings in parliament.
This is a modernized version of traditional tribal councils that have defined collective decision-making in the Middle East for thousands of years. Tribal leaders engage informally to iron out their differences, do some horse-trading, and finally achieve a consensus, which citizens dutifully applaud. If there is no consensus, one or more parties would usually boycott governance institutions and send the whole system into hibernation, as happens in Lebanon routinely, when the country lacks a cabinet, a president, a functioning parliament or some other vital institution. Yet life goes on more or less normally, because real power is not vested in these institutions, but rather in the informal meetings of heads of sects (or of tribes in places such as Jordan, Yemen or Libya).
So it is simple enough for most of us to just ignore the elections taking place in the region. Yet we have had glimpses of democratic transitions that include more credible elements, such as the Tunisian elections in recent years, or the 2012 Egyptian presidential election that saw one candidate win by just a few percentage points.
We also see credible elections taking place all over the region in professional associations or student groups. So the idea that Arabs cannot behave democratically and electorally is nonsense.
What is the problem, then? The continuing insult of Arab presidential elections such as we have recently witnessed in Algeria, Egypt and Syria suggest to me that the problem is squarely in the nature of state configuration and the exercise of power. When citizens have no say in how to shape and define their state and its institutions of decision-making, power remains almost exclusively in the hands of a family or elite at the top that controls the state budget and enjoys the support of the armed forces, in other words that controls the guns and the money.
Citizens across the Arab world have risen up in revolt against this pattern of rule, which nevertheless has endured in Syria, Bahrain, Egypt, Sudan and Algeria, among others. 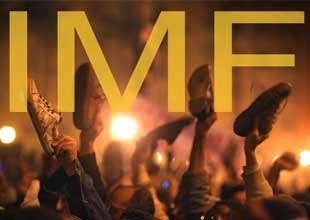 
"We saw eye-to-eye on almost everything ... I feel very comfortable that what they are recommending is what needs to be done," he said.
Posted by Tony at 2:49 PM No comments: