The Syrian opposition has accused the Assad government of using UN-backed local truces to carry out “ethnic and political cleansing on an unprecedented scale".
The comments come a week after the Damascene district of Daraya surrendered to the government. The area has been besieged, starved and bombarded from the air over the past four years, leading its population to drop from over a quarter of a million to just 4,000. In that period, only one UN aid convoy reached the besieged enclave.
Speaking on state television, Syrian national reconciliation minister Ali Haidar said: “Daraya is a domino, and after that others will fall,” adding that such regions could not "remain isolated cantons that pose a threat to the state".
The remaining population of Daraya was transferred north to Idlib province. The same is happening in Moadamiyah, another suburb of Damascus that infamously suffered a sarin gas attack in 2013 in which 1,500 people died.
This pattern led UN envoy to Syria Staffan de Mistura to comment: “There is clearly a strategy at the moment to move from Daraya to other besieged areas in a similar pattern.”
Last month, the UN labeled just under 20 regions, with a combined population close to 600,000, as besieged.
UN aid chief Stephen O’Brien, for his part, said: "What happened in Daraya should not be precedent-setting for other besieged areas in Syria." He emphasized that “all sieges, a medieval tactic, must be lifted".
The head of the Syrian opposition negotiation team in Geneva, Riyad Hijab, went further still, claiming the UN was inadvertently facilitating the process. “These local truces are paving the way for ethnic and political cleansing on an unprecedented scale,” he said.
"The Syrian regime, along with its Russian and Iranian allies, is relentlessly pursuing a malicious plan to orchestrate extensive demographic shifts across Syria."
This is not the first time the Assad government has been accused of implementing demographic change in the war-torn country. A report by the Syrian Network for Human Rights found that of the 56 sectarian or ethnic massacres between 2011 and 2015, 49 were perpetrated by the government.
Posted by Tony at 7:54 AM No comments:

End to war now seems further away than ever as the Kurds, US and Turkey each have goals that are rarely compatible

In the Pentagon’s fight against Islamic State, the Kurds had always been a good fit. In northern Iraq they were both trusted ally and known quantity. On the battlefields of Syria they were seen as better trained, more able and more motivated than any other group, including the Arab militias that the US had supported elsewhere in the war.
There remained one big problem, though: Turkey. With a deep and unresolved enmity towards the very groups the US had chosen as allies in Syria, the arrangement was always likely to rupture. Last week, it did just that.
After seething at Kurdish gains on its southern border over the past year, Ankara sent tanks and troops to Syria in pursuit of the Kurds who it insisted were using the remit the US had given them as a premise for a land grab that would realise historical ambitions. Going after Isis in the border town of Jarabulus was Turkey’s stated goal, but stopping the Kurds in their tracks was more important.

Analysis Turkey and US unite to oust Isis and curb Kurds

Joe Biden reassured Ankara, but it is unclear how Washington’s Kurdish proxies will react to his demand that they step back
Read more
One week on, the Turkish intervention continues to highlight a stark reality in Syria: each party is fighting its own war on the world’s most internecine battlefield, with goals that are rarely compatible, even with those of their allies. The bottom line is that a solution to the increasingly opaque and endlessly destructive conflict seems further away than ever.
Turkey’s entry into the war has exposed a rapidly shifting series of alliances that would not have been predictable at the start of the year, making surefooted partnerships now seem hesitant. Back then, the losses of the Syrian regime were being steadily turned around through a robust Russian intervention, which had battered opposition groups in the north of the country and sent the Syrian Kurds into areas they had never before controlled.
The Kurds’ manoeuvres had two effects: to close supply lines to the border used by Turkish-backed anti-Assad groups and – far more importantly – to needle Ankara where it would hurt most, by helping move Kurds into a 90-mile zone between a Kurdish enclave in north-west Syria and another in the north-east, therefore unifying the two areas.
It was precisely the nightmare scenario that Ankara had warned Washington about throughout its use of Kurdish groups as a proxy to fight Isis. The closing of the gap would change the demographic of the entire 500-mile border and, in doing so, create strategic depth for the PKK in south-east Turkey, which is firmly aligned to the Syrian Kurds.
Turkey’s worst fears were confirmed late in August when Kurdish forces who hadousted Isis from the town of Manbij turned their attention towards Jarabulus, which Isis had occupied for the past two years. Jarabulus lies west of the Euphrates river, which Ankara had long insisted was a demarcation line between the US-backed adventures to the east and its own core interests.
As it steadily picked off Isis-held towns near the Iraqi border, Washington had supported the Turkish stance and claimed it could control its proxies. The pivot towards Jarabulus blindsided the US and has derailed, for the time being, further plans to march towards Isis-held Arab towns. Instead, remnants of the Free Syrian Army, backed by Turkey, are now in the ascendancy. The Arabs rode across the border on Turkish tanks and now have their sights set on the town of al-Bab, the most western area held by Isis. What this means for the holy grail of Raqqa remains unclear.
What is certain is that Recep Tayyip Erdoğan has suddenly emerged as a decisive player in whatever comes next. And, having feuded with Vladimir Putin for nine months after Turkey’s downing of a Russian fighter jet last November, both leaders have now found common ground on Syria: the Kurds.
Putin’s ploy to use Kurdish militias to get to Erdoğan was a deft bait and switch. Neither man sees a breakdown of the Syrian border as advancing their goals. Moscow has not objected to Turkey’s advances and has even turned its guns away from the Ankara-backed rebels.
The Kurds, meanwhile, claim they have been abandoned by the US, which continues to see the war as a tailored fight to contain a cornerstone of a global jihad. For all the other stakeholders, a new phase of an interminable struggle for ethnic, sectarian and national identity is being played out.
It is for now impossible to reconcile competing visions for what will emerge from Syria. And it is just as difficult to see how any of the major players’ key goals can be met. Turkey’s detente with Russia has put both sides ahead in the lineup. On the other hand, a US-Turkish joint push into Syria appears to have been derailed by mutual distrust.
There is little from which to take comfort for those who still live in the wastelands of Syria. The country has been carved up into spheres of influence that are doing little to slow its destruction.
Posted by Tony at 11:15 AM No comments:

AN ARAB FIRST! Grief in Iraq: inside the world's largest cemetery – in pictures 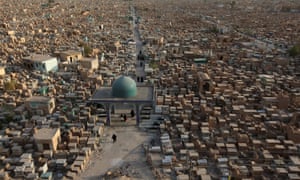