Finally, in Their Own Words: A Zionist Holocaust (Shoah) Against the Palestinians. Do We Still Need More Proof of the Nazi Nature of These Zionists? 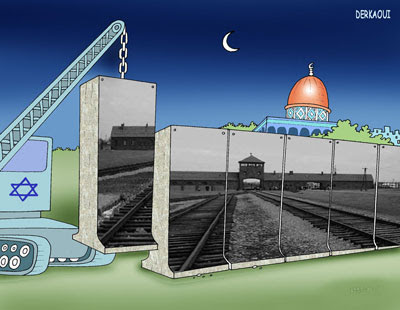 MKs call for Gaza invasion in wake of escalation

"The Israel Defense Forces must reoccupy part of the Gaza Strip for an unlimited time and overthrow the Hamas government, the chairman of the Knesset Foreign Affairs and Defense Committee said Friday, in the wake of escalating rocket attacks that peaked Thursday with a direct hit on a home in Ashkelon.

"The State of Israel must make a strategic decision to order the IDF to prepare quickly to topple the Hamas terror regime and take over all the areas from which rockets are fired on Israel," MK Tzachi Hanegbi (Kadima) told Israel Radio. He said the IDF should prepare to remain in those areas for years......

Deputy Defense Minister Matan Vilnai went as far as threatening a "shoah,"
the Hebrew word for holocaust or disaster. The word is generally used to refer to the Nazi Holocaust, but a spokesman for Vilnai said the deputy defense minister used the word in the sense of "disaster," saying "he did not mean to make any allusion to the genocide."

"The more Qassam fire intensifies and the rockets reach a longer range, [the Palestinians] will bring upon themselves a bigger shoah because we will use all our might to defend ourselves," Vilnai told Army Radio on Friday.

Hamas official Sami Abu Zuhri said of Vilnai's comments: "We are facing new Nazis who want to kill and burn the Palestinian people."......"
Posted by Tony at 4:20 AM