No Ambulance, Call the Radio

"GAZA CITY – "I am bleeding uncontrollably, I need an ambulance." That was not a call to emergency services, it was an appeal broadcast live on radio in Gaza City.

Who knows whether there will ever be an ambulance or not. But this way the ambulance services still hear the appeal broadcast on Al-Iman FM Radio Station, one of few independent radio stations in Gaza. And if the emergency services cannot help, someone else who hears the appeal might. 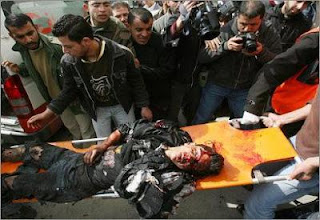 The ambulance dispatcher announces he cannot get the ambulance to the man. An Israeli bulldozer is blocking the road, and an Israeli tank on a hilltop has been firing at the ambulance, he says. Nobody can say if anyone else got to help the man. But at least his SOS could have been heard.

Appeals again went on air after the Friday attacks on Bureij refugee camp, where the death toll climbed to 16 by the weekend. The deaths included six children among nine people killed Friday. Again, ambulance crews confirmed they could not reach many of the injured. But the appeals were made on radio for all to hear.

A man called from east of Jabaliya refugee camp asking for an ambulance for his wife about to deliver. The radio host asked his location, and that of Israeli tanks. "I can't look from the window to see," he said. "They will shoot me if I do."......."
Posted by Tony at 6:29 AM