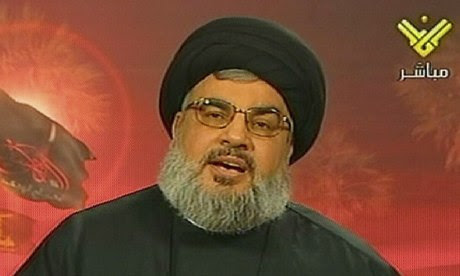 SECTARIAN ASSHOLE WITH LOTS OF BLOOD ON HIS HANDS.

Hassan Nasrallah says he will not bargain away 'the axis of resistance for some ministerial portfolios' to form a new Lebanese government. Photograph: -/AFP/Getty
Hassan Nasrallah, leader of Lebanon's Hezbollah movement, has vowed to keep his forces in Syria as long as necessary to support of the president, Bashar al-Assad.
In a rare public appearance in Beirut's southern suburbs, Nasrallah told supporters on Thursday that Hezbollah was defending Syria which in turn supported "the resistance" against Israel.
"Our presence there is justified," he said as hundreds of thousands of people marked the Shia festival of Ashoura.
Nasrallah usually speaks only via video link for fear of assassination by Israel, but for a second day running he appeared in public flanked by armed bodyguards – likely testimony to the importance of the occasion and to his defiant message.
"We have said on several occasions that the presence of our soldiers on Syrian soil is to defend … Syria, which supports the resistance [against Israel]," AFP quoted him as saying. Hezbollah was defending Lebanon, Palestine and Syria, he said.
Hezbollah has helped turn the tide of the war in Assad's favour this year, leading the recapture of the strategic town of Qusair and fighting alongside government forces south of Damascus and in the northern city of Aleppo.
Nasrallah flatly rejected the notion that Hezbollah should withdraw from Syria as a condition of forming a new government in Beirut. "We won't bargain our presence in Lebanon, Syria, and the axis of resistance for some ministerial portfolios," Hezbollah's al-Manar TV channel quoted him as saying.
Lebanon has been without a government for seven months because of divisions between Hezbollah and its opponents. The country's former prime minister, the Future Movement leader, Saad Hariri, has refused to drop his demand that the Shia militia withdraws from Syria. Nasrallah called that demand "crippling".
Sectarian tensions have risen in Lebanon as violence has spilled over the border in recent months. Nasrallah's speech on Thursday was made close to the scene of a car bombing that killed 24 people mid-August.
Hezbollah, a long-standing ally of both Iran and Syria, says it is supporting Assad against Sunni extremists who are targeting Syria's Alawite and Christian minorities. Saudi Arabia, Qatar and other Gulf states have armed and financed both Syrians and foreigners fighting Assad.
In a similar appearance, on Wednesday, Nasrallah accused Israel of being in league with Arab countries to torpedo a possible deal over Iran's nuclear programme.
He said: "Israel does not want any accord that would avert war in the region. It is regrettable that some Arab countries take the Israeli side in its murderous choices. It is regrettable that [the Israeli prime minister Benjamin] Netanyahu is the spokesman for some Arab countries.
"These countries reject any political solution that would stop the bloodbath and destruction in Syria. They also strongly oppose any accord between Iran and the countries of the world. We have two allies – Iran and Syria. We are sure of that alliance."
Posted by Tony at 8:24 AM