Those American boots. That Iraqi soil 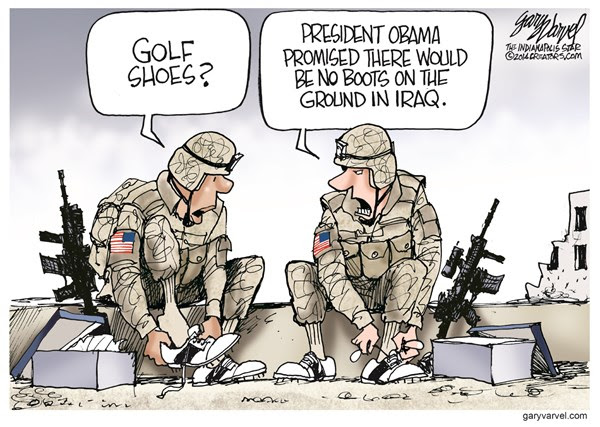 US public opinion on Iraq is changing. And the death of Abdul-Rahman (Peter) Kassig might put more pressure on Obama to do what some in the military want: return to Iraq with fanfare.
Just before he dashed off to Iraq, General Martin Dempsey, the chairman of the Joint Chiefs of Staff, told politicians in Washington that US troops might move to the front-line of the fight against the Islamic State group.

The Iraqi army and its allied militias have been able to claim some victories along the River Tigris against the group, known as IS, but they have not yet been able to take back Mosul. Thus far, several hundred US advisers, known as Joint Terminal Attack Controllers, have been helping "paint" targets for US aerial bombardments.

Dempsey suggested that a new batch of troops might work on the frontlines to guide Iraqi soldiers. These would likely be Special Forces and US Army Rangers. Dempsey said, however, that he did not "foresee circumstances when it would be in our interest to take this fight on ourselves".

It is already clear that the Iraqi forces are not capable of fighting IS on their own. Iraq’s former defence minister, Abdul Qader Obeidi, said that it was "unrealistic" to expect the Iraqi army in its current condition to be able to do more. It is one thing to fight "pockets of resistance"; it is quite another to fight land battles and conduct urban guerrilla operations.
Iraqi soldiers require at least a year of training for those kinds of operation.
In addition, the Iraqi army would have to be ready to fight an adversary which refuses to surrender. The ruthlessness and fearlessness of the IS fighters poses a serious morale problem for the underfunded and poorly trained Iraqi military.

Iraqi morale
Last week, the Iraqi prime minister Haider al-Abadi sacked 36 senior officers on grounds of corruption. This was a bold move against a military leadership that had been set up under the US occupation more as managers of money than as leaders of a fighting force.
During its occupation of Iraq, the US "outsourced" much of its security work to private firms, such as Vinnell, Erinys, Military Professional Resource Incorporated, Blackwater and Halliburton.
US advisers later encouraged the re-created Iraqi army to adopt the policy. This was a free-for-all for the new “generals” – “more investors than military leaders”, as Iraqis routinely say.
Abadi’s move was meant to boost morale. But who will replace the officers? Is the fabric of the military not woven with the thread of these outsourced habits that have bred corruption?
Over eight years, the US government spent at least $25 billion to create and train this new Iraqi military. That money seems squandered. Little benefit is apparent among the battalions that fled Mosul for the safety of Kirkuk in November.

Brigadier General Abdul Ameer Kamil, who is in command of the ring of troops around Baghdad, freely says that morale was very poor a month ago. His sense that matters have improved is hard to judge.

Iraqi authorities have in recent weeks won a number of victories against IS in towns including Amerli, Jurf al-Sakha and Baiji. But the army would not have been able to retake the towns without the help of irregular militia fighters.

The army would have constructed a perimeter and held the line while the militia fighters, adept at street-fighting, pushed IS out of the towns. This is why it is perhaps more accurate to speak of the pro-Baghdad militias being supported by the Iraqi army, rather than the other way around.
A speech last week by the IS leader, Abu Bakr al-Baghdadi, taunted the US for failing to send ground troops. Limited aerial bombardment might have dented the IS, but it has not stopped it. The US, said Baghdadi, "will be forced to come down to the ground and send their ground forces to their deaths and destruction".
US public opinion shifts
Osama Bin Laden’s 9/11 strategy was to draw the US into a ground campaign in Afghanistan, where it would face the same challenges the Soviets had before. That is the reason why his suicide bombers killed the charismatic leader of the Northern Alliance, Ahmed Shah Massoud, just days before the attack in the US. Bin Laden knew that the US would need Massoud as their commander on the ground.
Drawing the West into a quagmire has been the strategy of self-styled jihadis for two decades. It is what Baghdadi hopes will occur, for such an entry – he must believe – will allow him to don the mantle of patriotism rather than merely sectarianism.
Obama has pledged that the campaign in Iraq will be conducted without the return of US ground troops. They left in 2011 after the Iraqi parliament refused to allow foreign fighters extra-territorial protection, meaning US troops would be tried in Iraqi courts if facing criminal charges. That situation has not changed.
But as the weeks have gone by since Obama’s pledge in September, more and more Americans seem resigned to the return of combat forces. In September, only 39 percent wanted to see US troops return to Iraq; the number now is close to 50 percent.
Those who oppose a US troop deployment do so out of exhaustion; there is only a small minority that still believes the return US troops will only inflame an already dangerous situation.

And the death of Abdul-Rahman (Peter) Kassig, an American aid worker held hostage and murdered by IS in Syria last week, might put more pressure on Obama to do what some in the military would wish: return to Iraq with fanfare.

Opinions expressed in this article remain those of the original author and do not necessarily reflect the opinions of al-Araby al-Jadeed, its editorial board or staff.
- See more at: http://www.alaraby.co.uk/english/comment/f3541df5-1563-4144-b4ad-e5b0c4f86edd#sthash.TSRqRKXm.dpuf
Posted by Tony at 4:13 AM