The Spirit of Judy Miller is Alive and Well at the NYT, and It Does Great Damage


One of the very few Iraq War advocates to pay any price at all was former New York Times reporter Judy Miller, the classic scapegoat. But what was her defining sin? She granted anonymity to government officials and then uncritically laundered their dubious claims in the New York Times. As the paper’s own editors put it in their 2004 mea culpa about the role they played in selling the war: “We have found a number of instances of coverage that was not as rigorous as it should have been. In some cases, information that was controversial then, and seems questionable now, was insufficiently qualified or allowed to stand unchallenged.” As a result, its own handbook adopted in the wake of that historic journalistic debacle states that “anonymity is a last resort.”
But 12 years after Miller left, you can pick up that same paper on any given day and the chances are high that you will find reporters doing exactly the same thing. In fact, its public editor, Margaret Sullivan, regularly lambasts the paper for doing so. Granting anonymity to government officials and thenuncritically printing what these anonymous officials claim, treating it all as Truth, is not an aberration for the New York Times. With some exceptions among goodNYT reporters, it’s an institutional staple for how the paper functions, even a decade after its editors scapegoated Judy Miller for its Iraq War propaganda and excoriated itself for these precise methods.
That the New York Times mindlessly disseminates claims from anonymous officials with great regularity is, at this point, too well-documented to require much discussion. But it is worth observing how damaging it continues to be, because, shockingly, all sorts of self-identified “journalists” — both within the paper and outside of it — continue to equate un-verified assertions from government officials as Proven Truth, even when these officials are too cowardly to attach their names to these claims, as long as papers such as the NYT launder them.
Let’s look at an illustrative example from yesterday to see how this toxic process works. The New York Times published an article about ISIS by Eric Schmitt and Ben Hubbard based entirely and exclusively on unproven claims from officials of the U.S. government and its allies, to whom they (needless to say) granted anonymity. The entire article reads exactly like an official press release: Paragraph after paragraph does nothing other than summarize the claims of anonymous officials, without an iota of questioning, skepticism, scrutiny or doubt.
Among the assertions mindlessly repeated by the Paper of Record from its beloved anonymous officials is this one: 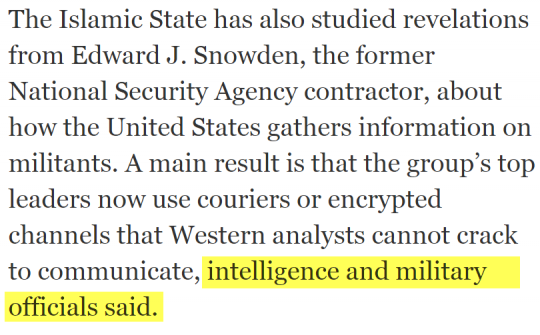 Leave to the side the banal journalistic malpractice of uncritically parroting the self-serving claims of anonymous officials, supposedly what the paper is so horrified at Judy Miller for having done. Also leave to the side the fact that the U.S. government has been anonymously making these Helping-The-Enemy claims not just about Snowden but about all whistleblowers for decades, back to Daniel Ellsberg, if not earlier. Let’s instead focus on this: the claim itself, on the merits, is monumentally stupid on multiple levels: self-evidently so.
To begin with, The Terrorists™ had been using couriers and encryption for many, many years before anyone knew the name “Edward Snowden.” Last August, after NPR uncritically laundered claims that Snowden revelations had helped The Terrorists™, we reported on a 45-page document that the U.K. government calls “the Jihadist Handbook,” written by and distributed among extremist groups, which describes in sophisticated detail the encryption technologies, SIM card-switching tactics and other methods they use to circumvent U.S. surveillance. Even these 2002/2003 methods were so sophisticated that they actually mirror GCHQ’s own operational security methods for protecting its communications.

This “Jihadist Handbook” was written in 2002 or 2003: more than a full decade before any Snowden revelations. Indisputably, terrorists have known for a very long time that the U.S. government and its allies are trying to intercept their communications, and have long used encryption and other means to prevent that.
The New York Times’ claim that ISIS learned to use couriers as a result of the Snowden revelations is almost a form of self-mockery. Few facts from Terrorism lore are more well-known than Osama bin Laden’s use of couriers to avoid U.S. surveillance. A 2011 article from the Washington Post — more than two years before the first Snowden story — was headlined: “Al-Qaeda couriers provided the trail that led to bin Laden.” It described how “Bin Laden strictly avoided phone or e-mail communications for fear that they would be intercepted.” 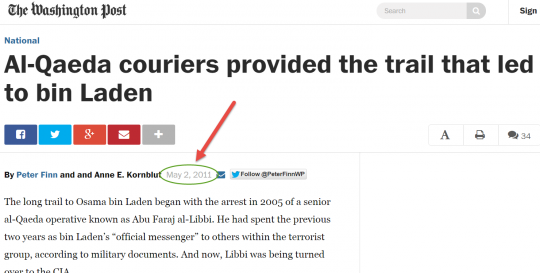 Terrorists have been using such surveillance-avoidance methods for almost two full decades. In May, we published a 2011 NSA document that quoted Jon Darby, NSA’s then-associate deputy director for counterterrorism, as saying that “[o]ur loss of SIGINT access to bin Laden actually occurred prior to 9/11 — it happened in 1998.”
If one were engaged in journalism, one would include some of these facts in order to scrutinize, question and express skepticism about the claims of anonymous officials that ISIS now uses encryption and couriers because of Snowden reporting. But if one is engaged in mindless, subservient pro-government stenography, one simply grants anonymity to officials and then uncritically parrots their facially dubious claims with no doubt or questioning of any kind. Does anyone have any doubts about what these New York Timesreporters are doing in this article?
There’s one more point worth noting about the New York Times’ conduct here. As has been documented many times, Edward Snowden never publicly disclosed a single document: Instead, he gave the documents to journalists and left it up to them to decide which documents should be public and which ones should not be. As I’ve noted, he has sometimes disagreed with the choices journalists made, usually on the ground that documents media outlets decided to publish should have, in his view, not been published. 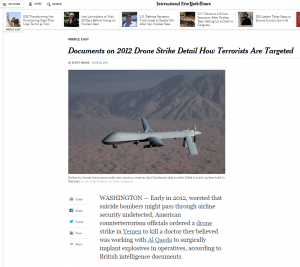 One of the newspapers that published documents from the Snowden archive is called “The New York Times.” In fact, it is responsible for publication of some of the most controversial articles often cited by critics as ones that should not have been published, including ones most relevant to ISIS. When it comes to claiming credit for Snowden stories, the New York Times is very good at pointing out that it published some of these documents. But when it comes to uncritically publishing claims from anonymous officials that Snowden stories helped ISIS, theNew York Times suddenly “forgets” to mention that it actually made many of these documents known to the world and, thus, to ISIS. What the New York Times is actually doing in this article is accusing itselfof helping ISIS, but just lacks the honesty to tell its readers that it did this, opting instead to blame its source for it. In the NYT’s blame-its-source formulation: “The Islamic State has studied revelations from Edward J. Snowden.”

When I was first told about the Sunday Times’ now disgraced story claiming that Russia and China obtained the full Snowden archive, my initial reaction was that the story was so blatantly inane and so journalistically corrupted — based exclusively on unproven, self-serving accusations from anonymous U.K. officials — that it wasn’t even worth addressing. I changed my mind anddecided to write about it only when I saw huge numbers of journalists sitting around on Twitter that night uncritically assuming that these claims must be True because, after all, government officials said them and a newspaper printed them.
I went through exactly the same process when I saw this Snowden-helps-ISISclaim laundered yesterday in the New York Times. I assumed that the “journalism” here was so glaringly shoddy that nobody needed me to write about it, and that a few mocking tweets would suffice. Everyone knows by now to treat anonymous government claims like this critically and not accept them as true without evidence — or so I reasoned.
But then I began seeing one self-described journalist after the next treat the accusation from these anonymous officials as tantamount to Proven Truth. They just started asserting that Snowden’s revelations helped ISIS without a molecule of doubt, skepticism or critical thought. That’s what makes this process so destructive: once the New York Times uncritically publishes a claim from a government official, even (maybe especially) if anonymous, huge numbers of “journalists” immediately treat it as Truth. It’s shocking to watch, no matter how common it is.
Here are just a few examples: first, from New York Times reporter Alex Burns, stating the Snowden-helped-ISIS claim as fact:
Now here’s long-time journalist Kurt Andersen, demanding that Snowden be confronted and made to say whether he regrets this:
Here’s a tweet claiming the NYT “reported” this, re-tweeted by long-time NYTand CNBC journalist John Harwood:
After I noted that the NYT “reported” no such thing but merely uncritically wrote down what anonymous officials said, here’s Harwood explicitly defending classic stenography as “reporting”:
Here’s a CNN and Miami Herald columnist, Frida Ghitis, nakedly treating the anonymous claim as true by blaming Snowden for helping ISIS:
Here’s a tweet Business Insider sent to its 1.1 million followers this morning:
Here’s self-proclaimed “terrorism expert” Will McCants mindlessly repeating it as fact:
And now the bottom-feeding British tabloid Daily Mail has a just-published screaming, hysterical story based exclusively on the anonymous assertion laundered by the New York Times: 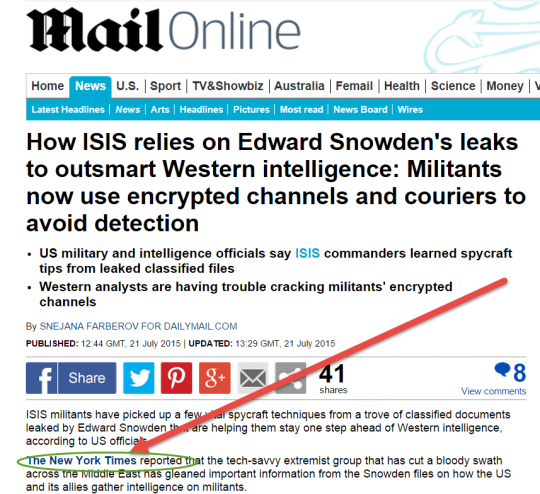 Look at what the New York Times, yet again, has done. Isn’t it amazing? All anyone in government has to do is whisper something in its journalists’ ears, demand anonymity for it, and instruct them to print it. Then they obey. Then other journalists treat it as Truth. Then it becomes fact, all over the world. This is the same process that enabled the New York Times, more than any other media outlet, to sell the Iraq War to the American public, and they’re using exactly the same methods to this day. But it’s not just their shoddy journalism that drives this but the mentality of other “journalists” who instantly equate anonymous official claims as fact.
The peak of the Sunday Times’ humiliation was when its lead reporter, Tom Harper, went on CNN and expressly admitted that the paper did nothing other than mindlessly print anonymous government claims as fact without having any idea if they were true. What made Harper a laughingstock was this sentence, captured in a Vine by The Guardian’s HannahJane Parkinson (to listen, click the “unmute” button in the lower right-hand corner):


How is this not exactly what the New York Times, yet again, has done? In fact, if one replaces “British” with “American,” is that not the actual motto describing how this paper so often behaves, one might even say their core function?
Posted by Tony at 7:45 AM