Syrian jets have again bombed the opposition-held Damascus suburb of Douma hours after the United Nations condemned air strikes carried out on Sunday that killed more than 100 people.
Warplanes attacked the district for the second day running on Monday amid claims from survivors that the global focus on Islamic State meant other atrocities were increasingly being ignored.
Stephen O’Brien, the UN’s most senior humanitarian official, said he was horrified by the total disrespect for civilian life in the conflict, which has left at least 250,000 people dead and up to four times that number injured.
Speaking briefly at the end of a three-day visit to Damascus, the Syrian capital, O’Brien reiterated that “attacks on civilians are unlawful, unacceptable and must stop”. He said: “I am particularly appalled by reports of air strikes causing scores of civilian deaths and hundreds injured.”
The United States also condemned the strikes and insisted President Bashar al-Assad must go.
“Yesterday’s air strikes, following its other recent market bombings and attacks on medical facilities, demonstrate the regime’s disregard for human life,” State Department spokesman John Kirby said.
“As we have said, Assad has no legitimacy to lead the Syrian people,” he added.
Kirby said Washington and its allies want a “political transition away from Assad that brings an end to such attacks and leads to a future that fulfils Syrians’ aspirations for freedom and dignity.”
The attack on a marketplace near the centre of Douma at about 2pm on Sunday was one of the deadliest air strikes by the regime in the four-year civil war.
It took place several kilometres from the chemical weapons attack on the east Ghouta countryside in August 2013, which was widely blamed on Syrian forces. Ever since, Douma, which lies 10km from the centre of Damascus, and other towns in the nearby agricultural belt, have endured unrelenting bombardment.
An Amnesty International report released this month said there had been at least 60 air strikes on eastern Ghouta between January and June this year, killing more than 500 people.
Gravediggers in the area said more than 100 graves had been prepared from Sunday afternoon and many burials had taken place without the remains of the victims being identified.
O’Brien had been in Damascus to negotiate better access to food and medicine in regime and opposition parts of the country. East Ghouta’s proximity to the seat of power and the fact that Jaysh al-Islam, a powerful opposition group, maintains a stronghold there, has made it a particular target.
Eyewitnesses said many of Sunday’s victims were either killed or wounded by missiles fired from jets as rescuers gathered to deal with casualties from the first of about 10 strikes. 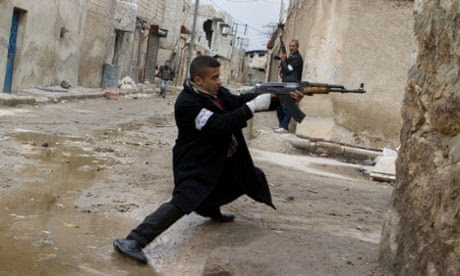 The man with the toughest job in the world

Read more
Hassan Taqulden, an activist based in the suburb, said there were so many dead that locals were unable to conduct funeral prayers for many of them, a sacred rite in Islam.
He told the Guardian: “You couldn’t have a single tomb for every martyr. I saw so many mothers weeping for their children.”
Taqulden said the public market was obliterated. Civilians and children who gathered there afterwards tried to scrounge any vegetables that were left on the ground in order to feed themselves. Many people are going hungry as a result of the continuing siege of the area.
He said: “We are living a real tragedy. The bombing has become daily, almost normalised, a word I fear to use. At 9am the planes come, and I no longer have an alarm on my phone, I wake up with the air strike, or a mortar shell, or the death of a family member or a friend.”
Syrian state media acknowledged on Monday that regime forces had carried out Sunday’s attack and claimed a Jaysh al-Islam base was the target. Opposition supporters on the ground said the group’s headquarters was 3km away from the marketplace and its whereabouts was well known to the regime.
A second witness, the Douma-based photographer Bassam al-Hakeem, said: “I entered the market and the corpses were scattered everywhere, human remains thrown on the produce and vegetables, and under every box of tomatoes was a corpse or part of a corpse.”
Locals believe the air strikes were in retaliation for an attack by Jaysh al-Islam on a nearby regime army base on Saturday. It has strong support in Douma, one of the main opposition strongholds near Damascus over the past three years.

Regime forces have been ceding territory to rebel fighters and Islamic State to regroup in western strongholds
Read more
The Amnesty report said the Syrian government and some opposition groups had repeatedly ignored UN resolutions, which aimed to secure humanitarian access to the area and the other besieged regions ofSyria. It said: “They have maintained unlawful sieges, restricted humanitarian assistance deliveries, deliberately attacked civilians and carried out indiscriminate and disproportionate attacks, arbitrary detentions, abductions and enforced disappearances.”
There was no immediate reaction from other aid agencies, or the international community, which has increasingly focused its energies elsewhere in the conflict, particularly on Isis, which occupies much of the east of the country and in the past two months has established a foothold in Palmyra, to the north-east of Damascus.
After insisting earlier in the conflict that the Syrian leader, Bashar al-Assad, must be removed from power, the US and European states have toned down their rhetoric in recent months as Syrian forces have launched bombing raids against Isis.
Assad, meanwhile, has claimed that an alliance with his government is the best way to defeat a common foe in Isis, which grew in strength as the grinding war between opposition and regime forces steadily splintered into a series of micro-wars and drew in a mixture of anti-Assad fighters, jihadis and pro-Assad militants from across the region.
Fighting across the capital has ebbed and flowed throughout this year, but intensified lately, as it has elsewhere in rebel-held parts of the country. Syria’s military has regularly been accused of targeting civilian sites, such as bread queues and hospitals.

If Barack Obama ever had a strategy for Syria, it’s been turned on its head

Read more
Médecins Sans Frontières (MSF) said air strikes landed on or near nine hospitals in Idlib province between 7 and 10 August, killing 31 people, including hospital staff and patients.
Sylvain Groulx, MSF’s head of mission for Syria, said: “These recent attacks are a clear violation of international humanitarian law, which prohibits military attacks on hospitals. Air strikes are capable of targeting specific buildings and these hospitals are known locations. They must be respected as neutral spaces where civilians can safely access their right to healthcare services.”
Much of Syria’s civil infrastructure has been decimated during the war, which despite the rise of Isis and the increased involvement of regional stakeholders – Iran and Russia on the regime side and Turkey, Qatar, and Saudi Arabia with the opposition – has eluded any moves towards an enduring ceasefire.