Cases of severe malnutrition have been confirmed among children in the besieged Syrian town of Madaya, hours after the UN chief, Ban Ki-moon, described the use of starvation tactics in the civil conflict as a war crime. 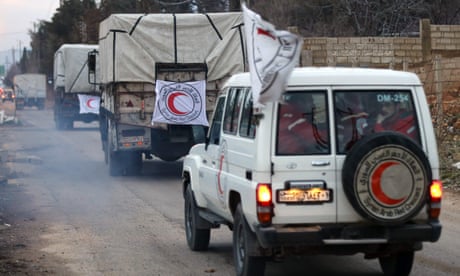 Read more
“Let me be clear: the use of starvation as a weapon of war is a war crime,” he told reporters at the UN. “I would say they are being held hostage, but it is even worse. Hostages get fed.”
He said the images of emaciated civilians in Madaya, which sparked worldwide condemnation and were followed by the Syrian government agreeing to allow aid deliveries, reflected a new low in the five-year war that had reached “shocking depths of inhumanity”.
On Friday, Unicef confirmed cases of severe malnutrition in the town, where residents had told the Guardian they were reduced to cooking grass uprooted from minefields in the area and tree leaves to survive.
Of 25 children under five screened by the organisation, 22 were suffering from moderate to severe malnutrition.
“Unicef is particularly saddened and shocked to have witnessed the death of Ali, a severely malnourished 16-year-old boy who passed away in the town’s clinic in front of our eyes,” the agency said in its statement.
An aid convoy bearing food, medicine and hygiene kits entered Madaya on Monday, while another convoy simultaneously entered Fua and Kefraya, two regime-held villages in northern Syria besieged by rebels. Another convoy carrying wheat flour and other supplies reached Madaya on Thursday in a joint mission by the International Committee of the Red Cross, the Syrian Arab Red Crescent and the UN.
“The smell of bread, its taste, its shape, all these are things we had forgotten, and today we remembered them,” said Ebrahem Abbas, a resident in the town.
A security council meeting requested by the US, Britain and France is expected to be held on Friday to discuss the plight of 400,000 Syrians living under siege in the country. Starvation sieges have been used repeatedly by the government of Bashar al-Assad during the war, largely in an effort to win the acquiescence of areas in rebel hands that it considers of strategic importance, such as the countryside around the capital Damascus.
Posted by Tony at 7:37 AM