Dozens killed in bombing of national hospital in Idlib

Attack, apparently by forces loyal to Assad regime, is latest incident in aerial campaign against medical facilities in Syria 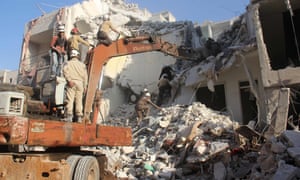 At least two dozen people including several children have been killed in northern Syria in the latest apparent attack by forces loyal to the Bashar al-Assad regime on medical facilities in opposition-held areas, UN officials and activists have said.
The bombing of the national hospital and its surroundings in Idlib city, a provincial capital wrested from Assad-regime control last year, was only the latest incident in an unforgiving and systematic aerial campaign against medical personnel and facilities that has gone unpunished despite its intensification over the last year and a half. 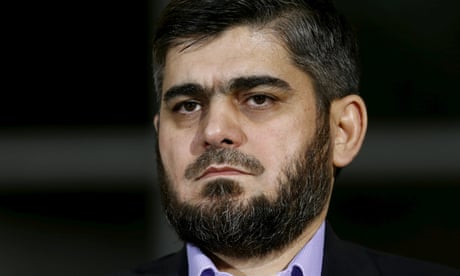 Read more
“There is no use to all of this. The bombing of hospitals will continue and cannot be stopped – that much is clear,” said Zedoun al-Zoabi, the head of the Union of Syrian Medical Relief Organisations, which operates a number of hospitals in northern Syria. “We have lost hope, and all we can do is build hospitals underground because there is no international decision to prevent the bombing of hospitals.”
A statement from the office of the UN high commissioner for human rights sent to the Guardian said the attack happened at 10pm on Monday, with multiple airstrikes by pro-government forces targeting the national hospital. According to first responders, at least 30 people were killed and dozens of civilians wounded, with the death toll likely to rise amid ongoing rescue operations, the statement said.
The Syrian Observatory for Human Rights said several children were among the dead. It was unclear if the attack was conducted by Russian or Syrian fighter jets.
Farouk Kashkash, the hospital’s director, told the Guardian the missiles struck very close to the hospital and put its operations theatre out of service, covering much of the facility with debris and wreckage and prompting patients to escape and its staff to go underground. “The staff have stopped working because of the imminent danger,” he said. “We expect everything. What do you expect an enemy to do? They do everything, targeting hospitals, women and children. It is no longer strange.”
The government of Assad considers all medical facilities operating in opposition territory as legitimate military targets under a counter-terrorism law passed early in the civil conflict, now in its sixth year. The act prompted many opposition hospital directors to cease providing GPS coordinates of their facilities to the air forces operating over Syrian territory.
Last month, a hospital backed by Médecins Sans Frontières and the International Committee of the Red Cross was destroyed in an airstrike in Aleppo, killing patients and doctors including one of the last paediatricians remaining in the rebel-held part of the city.
As early as 2013, the UN independent commission of inquiry investigating alleged war crimes in Syria said attacks on medical facilities were being used systematically as a weapon of war by the Assad regime. Attacks by both sides on medical facilities have continued unabated in recent months. MSF said in February that a total of 94 airstrikes and shelling attacks hit facilities supported by the organisation in 2015 alone.
In February last year, the NGO Physicians for Human Rights said it had documented 224 attacks on 175 health facilities since the start of the conflict, and 599 medical personnel had been killed.
Humanitarian sources say the Idlib hospital, which was also struck last year, has now entirely stopped operating. It was the fourth medical facility to be targeted in just the last two days by the Assad regime – the Shawqi Hilal dialysis centre in rural Aleppo, an internal medicine hospital in Idlib and a first aid community called Shaam in Idlib were all hit in recent days.
The ICRC in Syria tweeted:
Activists said the number of dead was likely to rise as many civilians in the area were still unaccounted for, and others have been seriously wounded and may not survive.
Footage has emerged of the aftermath of the latest attack in Idlib, showing civil defence workers recovering civilians and children from under the debris of nearby buildings, many of which were largely destroyed in the strikes.
“The search and rescue efforts are continuing by the civil defence teams since yesterday’s massacre and the teams are working on rescuing the victims,” the civil defence in Idlib said in a statement. “A little while ago we rescued an infant and a woman.”
“The planes of the regime and its allies have not stopped violating the ceasefire and the criminality and murder are ongoing,” another statement said.
Voice recordings from the hospital immediately after the bombing, provided by Kashkash, the hospital director, depicted confusion as staff attempted to escape, shouting that dust had filled the medical facility’s basement.
Syrian government forces withdrew from Idlib last year after a spring offensive by an alliance of rebels known as Jaysh al-Fateh, including the al-Qaeda affiliate Jabhat al-Nusra, succeeded in dislodging the government from the entire province. The withdrawal was followed by a punishing air campaign that included the deployment of chlorine gas as a weapon. 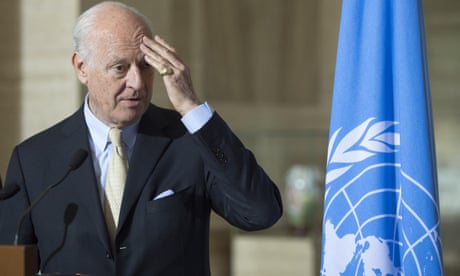 Read more
Aerial bombardment of the province was also carried out by the Russian air force when it intervened in support of Assad last autumn.
The Turkish government, whose territory borders Idlib province, condemned what it called an appalling attack, saying it was further evidence that the Kremlin, Assad’s key backer, was not interested in a political solution to the crisis. Peace talks in Geneva recently collapsed as allies of Assad refuse to negotiate a political transition that would ease him out of power.
“It is clear that [the] Russian Federation who claims to advocate a political solution and the cessation of hostilities agreement, is blatantly disregarding the very principles it purports to uphold,” the foreign ministry said in a statement.
“We expect the international community to deliver on its commitments without further delay in the face of these crimes committed by the regime and the Russian Federation,” the statement added.
It is unlikely there will be retribution for the escalating attacks on hospitals in the conflict. In early May the security council, including Russia, unanimously adopted a resolution calling for an end to attacks on medical facilities, but such attacks have continued in both Syria and Yemen, where the security council members are either directly involved in hostilities or providing logistical support to the combatants.
Posted by Tony at 8:03 AM