A video frame grab, provided by the Revolutionary Forces of Syria, shows smoke rising after an airstrike on the village of Haas, Syria. Photograph: AP
Link

Airstrikes in rebel-held Idlib province on Wednesday were possibly the deadliest attack on a school since the Syria war began, a top UN official has said, describing the incident as an “outrage” and a possible war crime.
The strikes by Syrian or Russian warplanes killed at least 35 people, most of them schoolchildren, rescue workers and a monitoring group have said.
“This is a tragedy. It is an outrage. And if deliberate, it is a war crime,” said Unicef’s executive director, Anthony Lake.
“This latest atrocity may be the deadliest attack on a school since the war began more than five years ago,” he added. “Children lost forever to their families … teachers lost forever to their students … one more scar on Syria’s future. When will the world’s revulsion at such barbarity be matched by insistence that this must stop?”
Wednesday’s raids hit a residential area and a school in Hass village, the Syrian civil defence rescue workers’ network said on its Facebook account. 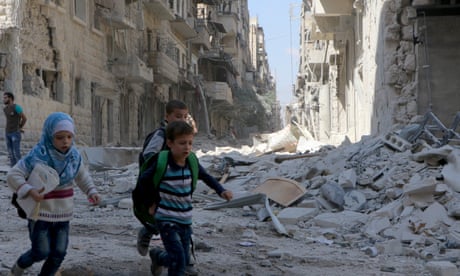 Read more
Syria’s civil war pits the president, Bashar al-Assad – backed by Russia, Iran and Shia Muslim militias from Lebanon, Iraq and Afghanistan – against an array of mostly Sunni Muslim rebel groups, including some backed by Turkey, Gulf monarchies and the US.
A report on Syrian state TV quoted a military source saying a number of militants had been killed when their positions were targeted in Hass, but made no mention of a school.
A Russian foreign ministry spokeswoman said Moscow had nothing to do with the strikes and that it had demanded an immediate investigation. Claims that Russian and Syrian warplanes were involved were a lie, she added.
Earlier, Vitaly Churkin, Russia’s ambassador to the UN, said: “It’s horrible. I hope we were not involved. It’s the easiest thing for me to say no, but I’m a responsible person, so I need to see what my ministry of defence is going to say.”
Idlib, which is near Aleppo in north-west Syria, contains the largest populated area controlled by rebels – both nationalist groups under the banner of the Free Syrian Army and Islamist ones including the former al-Qaida affiliate Jabhat Fateh al-Sham.
The civil defence network, which operates in rebel-held areas in the country, said most of the dead in Wednesday’s attacks were children.
Photos taken at the scene showed buildings with walls reduced to rubble, including what appeared to be a school with upturned desks and chairs covered in dust.
The Syrian Observatory for Human Rights, a UK-based war monitor, said the warplanes had struck several locations in Hass including an elementary and middle school. At least 22 children and six teachers were among the dead, according to Unicef.
The UN body said that since the beginning of 2016, it has verified at least 38 attacks on schools around Syria, whether in government-held areas or rebel-controlled territory. Prior to Wednesday’s attack, 32 children had been killed this year in attacks on schools, Juliette Touma, the regional Unicef communication chief, told AP.
Western countries and international human rights groups have regularly highlighted the high number of civilian deaths reported after Syrian and Russian airstrikes.
The latest attacks came amid growing outrage at the disregard for civilians in the Syrian war, particularly in the Russian and Syrian campaign over Aleppo, which has killed hundreds of civilians.
In a blistering indictment on Wednesday, the UN humanitarian chief, Stephen O’Brien, called the failure of the UN security council, and Russia in particular, to stop the bombing of rebel-held eastern Aleppo as “our generation’s shame”.

Read more
“Let me take you to east Aleppo this afternoon,” O’Brien told the security council. “In a deep basement, huddled with your children and elderly parents, the stench of urine and the vomit caused by unrelieved fear never leaving your nostrils, waiting for the bunker-busting bomb you know may kill you in this, the only sanctuary left to you, but like the one that took your neighbour and their house out last night; or scrabbling with your bare hands in the street above to reach under concrete rubble, lethal steel reinforcing bars jutting at you as you hysterically try to reach your young child, screaming unseen in the dust and dirt below your feet, you choking to catch your breath in the toxic dust and the smell of gas ever-ready to ignite and explode over you.
“These are people just like you and me – not sitting around a table in New York but forced into desperate, pitiless suffering, their future wiped out,” O’Brien said, describing himself as “incandescent with rage” over the security council’s passivity.
“Peoples’ lives [have been] destroyed and Syria itself destroyed. And it is under our collective watch. And it need not be like this – this is not inevitable; it is not an accident ... Never has the phrase by poet Robert Burns, of ‘man’s inhumanity to man’ been as apt. It can be stopped but you, the security council, have to choose to make it stop.”
Churkin reacted by denouncing O’Brien’s vivid account of the humanitarian toll in the besieged city as “unfair and dishonest”. In a pointed attack, he told O’Brien to leave his comments “for the novel you’re going to write some day”.
Posted by Tony at 7:16 AM