New policy document criticised by many outside Gaza, amid claims Hamas has dropped decades of struggle to gain recognition

FOLLOWING THE FOOTSTEPS OF FATAH BEFORE......

Palestinian analysts have rounded on Hamas after it published a policy document promising a new direction, with some saying it had dispensed with decades of struggle in an attempt to gain international legitimacy.
Hamas on Monday released its 42-article declaration that accepted the 1967 borders as the basis for a Palestinian state, reneged on the call for Israel's destruction, and recognised the Palestine Liberation Organisation as the "national framework" of the Palestinian people.
However, many Palestinians outside of Hamas-controlled Gaza voiced their disappointment. An Arabic hashtag, "without substance" was used widely on social media, while many commentators and activists called the movement "opportunistic".

Several social media users were troubled by article 20, which stated that Hamas now aims to establish a Palestinian state along the 1967 borders as a formula for national consensus.
This move was a clear departure from Hamas' previous stance in calling for a complete retrieval of Palestinian lands along the 1948 borders.
"The second part of article 20 is a new conspiracy among a series of conspiracies led political parties," wrote Palestinian activist Fahd Abed on Facebook. "It is a clear and unjustifiable negligence of our people's suffering, sacrifice and blood."
"Our people are not a laboratory for experimentation nor our lands to be gambled with by political parties," he said, adding that the rift between the Palestinian people and political parties would only increase from here on.
Activist and journalist Fadi Arouri, from Ramallah, mocked the declaration on Facebook: "So now, after all these years, they [Hamas] tell me that they agree to a Palestinian state along the 1967 borders," he said.
"Why didn't they just declare that long ago instead of putting us through decades of infighting with Fatah and other political parties?" 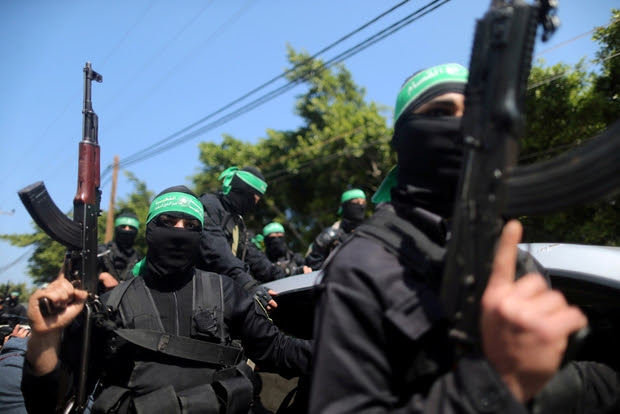 Some analysts see the move as an attempt by Hamas to ease tension with regional allies and assuage hostilities with global powers.
Speculation has also mounted over who will succeed 82-year-old Abbas, whose Fatah movement is based in the occupied West Bank, as Palestinian president.
Palestinian journalist and analyst Rami Mehdawi told MEE that after Israel had "weakened Fatah as a representative of the Palestinian people" this move by Hamas to appear "moderate" is in preparation for the movement to launch unconditional negotiations with Israel."
"It is an attempt to gain recognition and acknowledgement from the international community," added Mehdawi.
Also reflecting on the ongoing conflict between Fatah and Hamas, Palestinian activist Ahmed Harthi wrote in a Facebook post: "It is interesting that political parties are ready to become flexible and moderate in order to gain international recognition, while this flexibility disappears when we need to form a unity government."
"In an attempt to maintain power, we have seen both sides of the division [Fatah and Hamas] appear to be more flexible. But everything has a price and I fear that more seats in power will be at the price of achieving our political objectives."

'Too early to judge'

Some analysts said while the announcement was potentially positive, they would need more time to be convinced that the party has not given up on its principles.
"It is too early to judge whether this document is a political development and manoeuvre to gain international, Arab and Western recognition, or if it is the beginning of Hamas' downfall," Palestinian journalist Ahmed Jarrar told MEE.
"The coming days, or even years, will tell whether Hamas has established a new model for resisting Israeli occupation or not."
Not all reaction was criticism, however. Others social media users regarded the move as a necessary and balanced political manoeuvre.

Translation: The Hamas document a product of maturity, awareness, wise leadership and continuity in the path towards taking our rights and bringing us freedom.

Translation: Hamas has become the beacon of hope of this ‘ummah'. The biggest challenge now is not to let us down after this declaration.
Hamas is considered a terrorist group by Israel, the United States and the European Union, while it has strained relations with many Arab states.
It has fought three wars with Israel since 2008 which maintains a crippling blockade on Gaza.


On Tuesday, there were a number of Hamas-organised protests against the decade-long blockade, with a few thousand protesters taking to the streets in different cities.
Posted by Tony at 9:07 AM