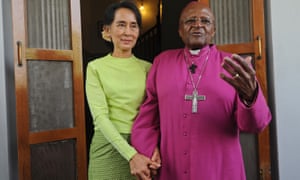 
Nobel laureate Desmond Tutu has called on Aung San Suu Kyi to end the violence against her country’s Rohingya Muslim minority in a heartfelt letter to the Myanmar leader.
The 85-year old archbishop said the “unfolding horror” and “ethnic cleansing” in the country’s Rahkine region had forced him to speak out against the woman he admired and considered “a dearly beloved sister”. 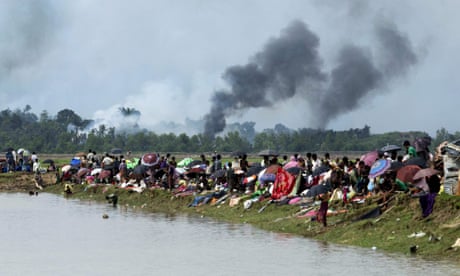 Read more
Despite Aung San Suu Kyi defending her government’s handling of the growing crisis, Tutu urged his fellow Nobel peace price winner to intervene.
“I am now elderly, decrepit and formally retired, but breaking my vow to remain silent on public affairs out of profound sadness,” he wrote in a letter posted on social media.
“For years I had a photograph of you on my desk to remind me of the injustice and sacrifice you endured out of your love and commitment for Myanmar’s people. You symbolised righteousness.
“Your emergence into public life allayed our concerns about violence being perpetrated against members of the Rohingya. But what some have called ‘ethnic cleansing’ and others ‘a slow genocide’ has persisted – and recently accelerated.
“It is incongruous for a symbol of righteousness to lead such a country,” said the 85-year old anti-apartheid activist. “If the political price of your ascension to the highest office in Myanmar is your silence, the price is surely too steep.”
Tutu joined the growing list of voices calling on Aung San Suu Kyi to do more to protect Myanmar’s persecuted Muslim minority. 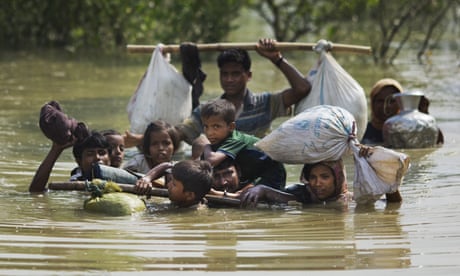 Who are the Rohingya and what is happening in Myanmar?

Read more
Malala Yousafzai, the youngest ever peace prize winner, said on Monday “the world is waiting” for Aung San Suu Kyi to act.
“Every time I see the news, my heart breaks,” she wrote on Twitter. “Over the last several years, I have repeatedly condemned this tragic and shameful treatment. I am still waiting for my fellow Nobel laureate Aung San Suu Kyi to do the same”.
On Tuesday, the United Nations secretary-general, Antonio Guterres, said the government clearance operations in Rakhine “risked” ethnic cleansing. A Change.org petition to revoke Aung San Suu Kyi’s Nobel peace prize had reached 377,332 signatures by Friday.
On Thursday, Aung San Suu Kyi made her first spoken remarks on the crisis in Rakhine since government crackdowns began last month.
“It is a little unreasonable to expect us to solve the issue in 18 months,” she told the Delhi-based network Asian News International. “The situation in Rakhine has been such since many decades. It goes back to pre-colonial times.”
According to UN estimates, up to 300,000 Rohingya could be displaced into Bangladesh due to “clearance operations” by the Tatmadaw, Myanmar’s armed forces.
The army says it is rooting out “terrorists” among the ethnic Muslim population, after fighters from the Arakan Rohingya Salvation Army attacked dozens of police posts on 25 August.
The Myanmar government claims about 400 have been killed so far, though UN officials estimate the death toll at more than 1,000.
On Friday, Tutu used his open letter to urge Aung San Suu Kyi to intervene and speak out.
“As we witness the unfolding horror we pray for you to be courageous and resilient again,” he said. “We pray for you to speak out for justice, human rights and the unity of your people. We pray for you to intervene in the escalating crisis and guide your people back towards the path of righteousness again.
Posted by Tony at 7:38 PM