Ilhan Omar has become the target of a dangerous hate campaign

Fox News, New York Post and Donald Trump are contributing to a climate of vigilantism that threatens every Muslim in America today 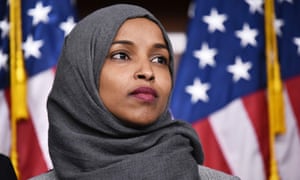 Here’s a question for you. Which American politician publicly referred to the terrorists who carried out the 9/11 attacks as “those folks who committed this act,” seemingly downplaying its horrors? Was it Minnesota representative Ilhan Omar? No. Try George W Bush.
Here’s another one. Which American politician publicly called Benjamin Netanyahu “your prime minister” while addressing a crowd of Jewish American supporters. Since the statement assumes Jewish Americans carry a dual loyalty to both Israel and the United States, you might assume it was Ilhan Omar, based on all we’ve been told about her. In fact, it was Donald Trump.
Or how about this. Who said that “the Stephen Miller approach to immigration has no viability”, adding that “Mr Miller is well known…for having views that are outside the mainstream,” suggesting Miller is in reality a political extremist who doesn’t belong in government? Was it Ilhan Omar? Wrong again. It was the Republican Senator Lindsey Graham.
Over and over again, Ilhan Omar’s detractors misrepresent her words and intentions, accusing her of saying things she didn’t say or condemning her for things that have been said before, even by Republicans themselves. 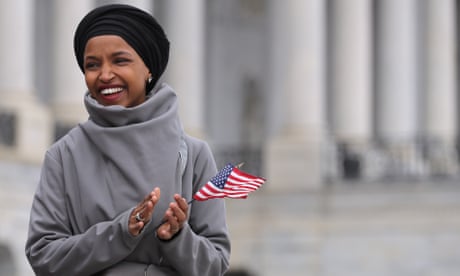 Read more
But the attacks continue. That’s why you could be forgiven for thinking that Ilhan Omar, one of the first two Muslim women ever elected to Congress, has said these – or even much worse – things. By now, she is accused so often of various speech and thought crimes that she almost seems like a figure in the Two Minutes Hate, the daily ritual used to whip party members into a frenzy in George Orwell’s novel 1984. In Orwell’s dystopia, the enemy of the people was the very Jewish-sounding Emmanuel Goldstein. If you believe some pundits, today’s enemy of the people is the very Muslim-looking Ilhan Omar.
Think I’m exaggerating? Consider how Ronna McDaniel, the head of the Republican National Committee, recently labeled Omar as “anti-American” on Twitter. Or then there’s Fox News’s Brian Kilmeade, who questioned Omar’s loyalty, saying “You have to wonder if she’s an American first.” (Kilmeade has since walked back his statement a tad.) A few weeks earlier and also on Rupert Murdoch’s Fox News, Jeanine Pirro questioned not just Omar’s loyalty to her country but really any hijab-observing woman’s allegiance to the United States. “Omar wears a hijab,” Pirro said, accusingly. “Is her adherence to this Islamic doctrine indicative of her adherence to sharia law, which in itself is antithetical to the United States constitution?”
The allegations are baseless, but the attacks continue. The latest manufactured outrage derives from a speech Omar gave last month to the Los Angeles branch of the Council on American-Islamic Relations. As the Washington Post noted, Omar’s 23 March speech was broadcast live (including on Fox News Online), but became controversial only days ago. In one phrase of her 20-minute talk, which was focused on Muslim Americans and civil rights, Omar says “some people did something” when referring to the September 11 attacks. It’s abundantly clear by the context of the talk that Omar was saying that the actions of a few have distressingly enabled the threat to the civil rights of so many. To allege that Omar was minimizing the horrors of September 11 is to deliberately misconstrue the point of her comments.

Read more
But that didn’t stop the New York Post from accusing Omar of precisely that. The cover of the Murdoch-owned tabloid had a picture of the Twin Towers in flames with the words “Here’s your something. 2,977 people dead by terrorism” plastered across the page, as if Omar herself is responsible for those deaths.
Appallingly, Donald Trump has now furthered the smear, tweeting a video linking Omar and the 9/11 attacks to his millions of followers.
This near daily vilification of Omar and distortion of her positions is not just politically problematic. It’s also dangerous. In February, authorities arrestedthe United States coast guard Lieutenant Christopher Hasson, an alleged rightwing extremist who, reports say, had placed Omar (among others) on a hit list. The West Virginia Republican party was criticized last month after a poster was displayed in the capitol rotunda that also linked Omar with 9/11. And just last week, a man from western New York was arrested for allegedly threatening to kill the Minnesota congresswoman.
In scoring their cheap political points, Fox News and the New York Post and the president of the United States himself are directly contributing to a perilous climate of vigilantism that threatens not only Omar but really every Muslim in America today.
On one level, it’s clear why Omar is subject to these attacks. Omar is black, a woman, an immigrant, a refugee and a Muslim. The fact that racism, sexism and bigotry drive a double-standard where Omar faces criticism while others received little to no scrutiny for the same comments is self-evident.
But that’s also not the full explanation. This double standard that is applied to Omar is meant to keep us from listening to what she is actually saying and doing. To call Stephen Miller a white nationalist, as Omar did, is to state an obvious truth. Omar added that “the fact that he still has influence on policy and political appointments is an outrage.” Rather than paying attention to her words, Omar was again caricatured as an anti-Semite. “Congresswoman Ilhan Omar has a well-documented history of antisemitic comments, social media posts and relationships,” the White House said, “so it’s not surprising that she would wildly attack a Jewish member of the administration.” 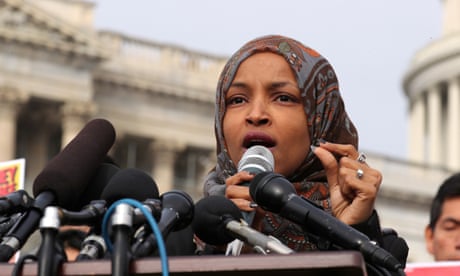 Read more
In fact, we should be paying all kinds of attention to Omar’s words and actions. She is principled and outspoken against all types of human rights abuses, having criticized Saudi Arabia for its war in Yemen, spoken outagainst Chinese repression of the Uighur population, stood with the Sudanese people in their uprising, opposed American intervention in Venezuela, grilled Elliott Abrams about his atrocious human rights record, and more. She is a cosponsor of the 9/11 Victim Compensation Fund, and has already introduced the Protect Against Unlawful Lobbying Act of 2019, and the Federal Worker Childcare Protection Act of 2019. Most recently, she cosponsored a bi-cameral bill to end Donald Trump’s Muslim ban. And she only began her job in January.
It’s no wonder that so many people, some from her own party, want to shut Ilhan Omar up. She has a lot to say and she says it. I for one will be listening closely.
Posted by Tony at 6:55 AM

Over 160k women and men are hacking their diet with a easy and secret "water hack" to burn 1-2 lbs every night in their sleep.

It's simple and it works on anybody.

This is how to do it yourself:

so you'll be 1-2 lbs skinnier in the morning!