A DEVASTATING REPORT FROM THE GUARDIAN

The United States is failing to report vital information on Covid-19 that could help track the spread of the disease and prevent the deaths of tens of thousands of Americans, according to the first comprehensive review of the nation’s coronavirus data.
The report, Tracking Covid-19 in the United States, paints a bleak picture of the country’s response to the disease. Five months into the pandemic, the essential intelligence that would allow public health authorities to get to grips with the virus is still not being compiled in usable form. 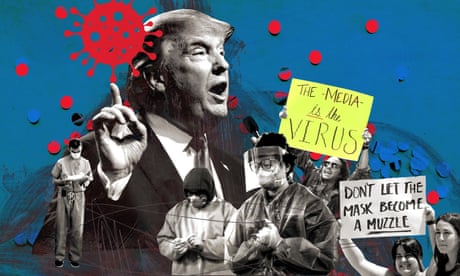 Pandemic brings Trump's war on science to the boil – but who will win?

Read more
That includes critical data on testing, contact tracing, new cases and deaths.
What the authors call “life-and-death information” is being pulled together haphazardly by individual states in a way that is “inconsistent, incomplete and inaccessible in most locations”. Without such intelligence the country is effectively walking blind, with very little chance of getting “our children to school in the fall, ourselves back to work, our economy restarted, and preventing tens of thousands of deaths”.
The review has been carried out by Resolve to Save Lives, a part of the global health group Vital Strategies. It is led by Tom Frieden, the former director of the main US public health agency, the Centers for Disease Control and Prevention (CDC).
Frieden lays the blame for the parlous and deadly state of data-keeping squarely on Donald Trump. Presenting the report, he said that the chaotic picture was the product of “the failure of national leadership. The US is flying blind in our effort to curb the spread of Covid-19.”
He added that the “lack of common standards, definitions, and accountability reflects the absence of national strategy, plan, leadership, communication or organization and results in a cacophony of confusing data”.
Resolve to Save Lives collaborated with leading US health organisations, including the Johns Hopkins Center for Health Security and the American Public Health Association, to produce a checklist of 15 essential data points in the fight against Covid-19. Among the categories that must be recorded if the disease is to be contained are real-time reporting of people presenting with Covid-like symptoms, new confirmed cases, hospitalisations, deaths and contact tracing.
What the authors discovered makes shocking reading, even for a country that has repeatedly generated grim headlines since the pandemic began. Across all states, only 40% of the essential data points are being monitored and reported to the public.
More than half of the critical information is still going entirely unreported – depriving political leaders of the weapons they need to fight the virus. In the case of 11 out of the 15 essential data points, not a single state was reporting them correctly; and in a further nine of the categories more than half of the states are failing to report any information on them at all.
Most alarming is contact tracing, a technique for isolating infected individuals that most experts agree is central to any attempt to control the pandemic. The report found that the information shared on contact tracing was “abysmal”, with not a single state reporting the turnaround time for diagnostic test results and only two states recording how long it took contact tracers to interview people who tested positive to identify others they may have infected.
The lack of a federal strategy to fight Covid-19 has been evident in the US from early on. The authors point out that many countries such as Germany, Senegal and South Korea have introduced national Covid-19 dashboards that standardize data and make it easy for health experts to track and combat the virus.
By contrast, Trump has encouraged the proliferation of chaos and confusion at state level by barring aggressive federal action. Since the first case of coronavirus was reported in Washington state on 20 January, the US president has used his considerable powers to undermine a science and data-driven fight against the disease.
He has frequently predicted the virus would “disappear” of its own accord, most recently in his Fox News Sunday interview with Chris Wallace this weekend.
Under his anti-scientific approach, Trump has tried to block new funding for the CDC and for coronavirus testing which he claims falsely is responsible for the huge increase in cases across many states. He has also presided over a smear campaign against Anthony Fauci, the top infectious diseases expert in the US.
By consistently resisting an aggressive federal attack on the virus, and offloading responsibility – and he hopes, political accountability – for the unfolding calamity on to the states, Trump has created the conditions for the current surge of infection across huge swaths of the country.
The impact in terms of lives lost or disrupted is plainly cast in the latest atrocious figures that show the number of confirmed cases at 3.8m nationwide and rising in 40 out of 50 states. More than 140,000 Americans have died so far – almost twice the number recorded by the next most affected country, Brazil.
Ultimately, the lack of consistent nationwide intelligence matters for two reasons – it makes the job of isolating and controlling the disease more difficult, and it leaves the public clueless as to the severity of the threat that surrounds them. Two groups of citizens are put especially at risk as a result of the dearth of data – older people in nursing homes and African Americans.
The report notes that a third of states are still not reporting any data on outbreaks of Covid-19 in facilities with contained populations such as nursing homes, homeless shelters, and prisons and jails. That poses a major risk to life as more than 40% of deaths in the US have been in long-term care facilities including nursing homes.
States are also failing to report real-time data on the demographic breakdown of the disease, notably for race and ethnicity. Black Americans have borne the brunt of the pandemic, dying at almost three times the rate of white Americans.
Posted by Tony at 11:46 AM

Pingulive said...
This comment has been removed by the author.
3:31 PM

Skip Hire Nottingham is the best skip hire services provider in Nottingham. Skip Hire Nottingham offers cheap prices and all kinds of skip sizes as we value the needs of our customers. We provide our services all across at a competitive price. Book your order now and Get 20% instant discount.

Are you squandering your time in investigating magicJack issues at your own, its opportunity to represent your keen and connect with shrewd specialists by approaching magicJack support telephone number +1(888)388-9197?

Thank you for the article very helpful one and yet knowledgeable too. We are cash for old cars company with car removal hand to hand services which are more popular among Australia and top offers are unbeatable among us than any others.

The best glass facade cleaning company in Riyadh relies on the latest advanced machinery and equipment that are used to clean large facades, and the cleaning and polishing process takes place in a short time, so that the place does not hang for a long time. The company provides the service of a large team of customer service personnel, who are present throughout the day in Serving the company's valued customers.
شركة تنظيف واجهات زجاج بالرياض

Very good quality. I am surprised how many attempts you set to make such an excellent informative website. Looking for Scrap Metal Services? All thanks to the team effort! Adrians Metal Recyclers provide their customers with Scrap metal gold coast. Avail of our quick and hassle-free car removal deal without worrying about the towing cost. You can easily get your car removed without thinking about the make, model, and condition. So, contact us today and receive a cash amount of up to $9,999.

Appreciating the time and effort you put into your website. Searching to remove your Car for Cash? Metal Biz Recyclers warm-heartedly greets every customer with any car they have. With our 100% customer satisfaction, you can easily get Scrap Metal Brisbane up to $9,999. Our skilled team will be at your doorstep to remove your unwanted car the same day you get a free quote from us. It’s a good day to avail of our offer.