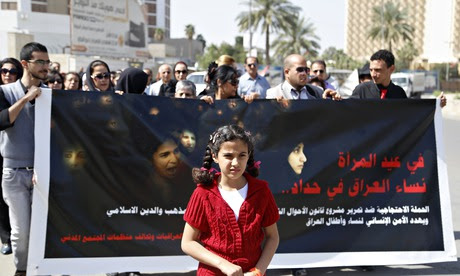 A demonstration against the draft personal status law. The sign reads: 'Women are not for sale or purchase.' Photograph: Thaier Al-sudani/Corbis
A draft law before Iraq's parliament that would legalise marrying girls as young as nine and restrict women's rights in parenting, divorce and inheritance is a political bid to define the identity of the country's majority Shias before next month's election, officials say.
The law, which was approved by Iraq's Council of Ministers two weeks ago, has generated widespread debate in Iraq six weeks ahead of the first national poll since US forces departed. International human rightsgroups have described it as a disastrous regression in the status of women.
The 30 April ballot is set to be contested on a cauldron of geopolitical issues, such as the reinvigorated insurgency in Anbar province, the raging war in neighbouring Syria and an ongoing dearth of services. But social issues – brought to prominence by the proposed law – are now also likely to feature in the debate, with secular and Islamic leaders anxious to define the social fabric of Iraq's largest sect.
The law was put forward by Iraq's justice minister, who heads the Fadila bloc, which has seven seats in the national parliament and is allied with prime minister Nour al-Maliki. In a surprise move, it was endorsed by the Council of Ministers last month, a pre-requiste before a vote could take place in the 325 seat assembly.
Observers say that Iraq's Shia religious authorities split on how to react to a debate that has roots in Islamic jurisprudence.
Known as the Jaafari personal status law, in reference to the 6th Shia Imam, the draft law legalises marital rape and enshrines a strict guardianship role for men over wives. It also gives automatic custody to fathers in divorce cases that involve children aged more than two years old. Most controversially, it allows girls to divorce from the age of nine – a clause that means they must have first been married.
Professor Hassan al-Shimari, a political analyst from Baghdad University said: "This is an attempt by Fadila to show Iraqis that they represent the Shia and want to make their identity clear before the election. "Everything is changing on daily basis and the division between the Shia themselves keeps being redefined.
Maliki, who is standing for a third term as leader and is set to cast himself as the redeemer of a country threatened yet again by a Sunni insurgency, has yet to declare his position on the draft law.
He has sent the proposal to committee, a move which analysts say is aimed at nullifying it as an election issue, while allowing Maliki to avoid the appearance of conflict with a core part of the Shia constituency.
Iraq's Shia leaders - including Ayatollah Ali Sistani, whose majority of the country's Shias follow - have so far not weighed into the debate
Governments in post-Saddam Iraq are typically formed after many months of horse trading where vested interests press issues that concern them, and there is a sense in Iraq that the law could only be seriously considered if Maliki ends up needing Fadila's support.
"He never said that he is with the law or against it," said Maliki's spokesman Ali al-Moussawi. "What we have done is democratic. We took this to be discussed then voted on. We didn't object straight away.
"Some media outlets show Iraq as it has gone backwards but this isn't true. In the west, people are talking about gay marriage. This is something we would never discuss and it is against our religion, our nature, yet we don't say that they are backwards."
A spokesman for the justice minister remained defiant: "There are those who disagree with this law and we don't care about them because they are against Islam. There are ones who are think we should modify the law (which will be open to religious interpretation) but for the rest, it is an election campaign and we don't care about what they say.
"Even if this law will be approved, it will be optional to Shia. This law will only be implemented on Shia and they have the right to take it or not when it is approved," he said.
Safia al-Suhail, one of 82 female MPs in Iraq's parliament said: "I hope they will put this to a vote in the parliament so it will be rejected by a majority.
"This law is humiliation to women and to Iraqis in general. It is a disaster not just for women but for children. These children shouldn't be exposed to such an ugly situation. It shows that we are going backwards. I hope Sistani will strongly react to it if it is ever taken to the parliament.
"Passage of the Jaafari law would be a disastrous and discriminatory step backward for Iraq's women and girls," said Human Rights Watch'sMiddle East and North Africa deputy director, Joe Storl. "This personal status law would only entrench Iraq's divisions while the government claims to support equal rights for all."
Posted by Tony at 4:17 AM