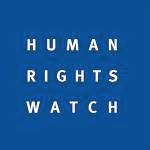 (Geneva) – The government of Syria should immediately and unconditionally release the arbitrarily detained human rights defender Mazen Darwish and his colleagues Hani Al-Zitani and Hussein Ghareer, 55 human rights organizations said today. The United Nations Security Council demanded the release of all arbitrarily detained people in Syria on February 22, 2014.
Darwish and his colleagues, held in violation of international standards by government authorities for over two years, are in the Adra central prison in Damascus pending trial before the Anti-Terrorism Court.

On March 10, the head of the Anti-Terrorism Court postponed the men’s trial for the seventh consecutive time,to March 24. The latest postponement was reportedly because a trial judge was sick but previous postponements were due to the government’s failure to present evidence against the three men.

The trial has failed to comply with international fair trial standards, the organizations said. The detainees have not seen the evidence against them, and fear that evidence extracted under torture may be used against them. There have also been excessive delays.

Syrian Air Force Intelligence arrested the three men on February 16, 2012, in Damascus, when officers raided the offices of the Syrian Center for Media and Freedom of Expression (SCM), a key local nongovernmental organization working to disseminate information regarding the human rights situation in Syria. The government has brought terrorism charges against the three men for their work at SCM, and despite credible reports that security forces subjected them to torture while in detention, there has been no investigation into the abuses.

Their ongoing detention is a part of a wider campaign of threats and harassment against human rights defenders in Syria which appears intended to prevent them from carrying out their legitimate and peaceful human rights work, the organizations said.

Despite repeated calls by the international community, including the United Nations, for the release of the three human rights defenders, the authorities have refused to release them. A May 15, 2013 UN General Assembly resolution included a demand for their immediate release and on January 14, 2014, the UN Working Group on Arbitrary Detention found their detention to be arbitrary and called for their release.

The Syrian authorities should immediately carry out UN Security Council Resolution 2139 adopted on February 22, 2014, the organizations said. The resolution demands the immediate end of arbitrary detention, torture, kidnappings, abductions, and forced disappearances and the release of all arbitrarily detained persons. In so doing, the government should immediately and unconditionally release and drop all charges against Darwish, Ghareer, and Al-Zitani.

The UN Security Council and the international community, in particular countries supportive of the Syrian government, should press for the immediate and unconditional release of all those currently arbitrarily detained, the organizations said.