Update Seymour Hersh has now let the world know what he knows about Volcano Rockets, which I've detailed in my latest piece, What Does Seymour Hersh Knows About Volcano Rockets?This article is now available in Turkish here.Yesterday, the London Review of Books published a second piece by Seymour Hersh on the August 21st Sarin attack.  In an earlier piece published in December 2013, Hersh had approached the attacks from two angles, that the White House had used dodgy intelligence in the build up to intervention in Syria, and that the evidence suggested the munition used were improvised, and therefore it was likely the opposition was responsible.  While the first point is certainly worth exploring, especially in light of information gathered about the attacks since August 21st, the second point was extremely flawed, with there being clear evidence of the government using the type of munitions linked to August 21st going back to late 2012, which I detailed in my piece Sy Hersh's Chemical Misfire.In his latest piece on August 21st, Seymour Hersh presents a narrative where the Turkish intelligence services aided the Syrian opposition in carrying out a false flag attack on August 21st, using one "former intelligence" source in particular.  EA Worldview has already put together an excellent response highlighting some of the major flaws in Hersh's piece, in particular the use of one source for most of his accusations, and I'd like to focus on one particular aspect of the attacks that Hersh appears to be ignorant of, or has chosen to ignore.In the aftermath of the Sarin attack on Eastern Ghouta on August 21st, the remains of munitions that were practically unknown where recorded at several impact sites (shown below)
After months of research it has been possible to gather a significant amount of information about these rockets.  August 21st was not the first time these types of rockets, known as "Volcano" rockets, were used in the conflict.  On August 5th 2013, three examples of the same type of rocket were filmed at the scene of an alleged chemical attack in the town of Adra, Damascus
Another example, described as a "chemical rocket" was filmed in June 2013, again in Adra, Damascus, with the remains of another type of the same rocket filmed in January 2013, in Daraya, Damascus, this time without it being described as a chemical rocket. 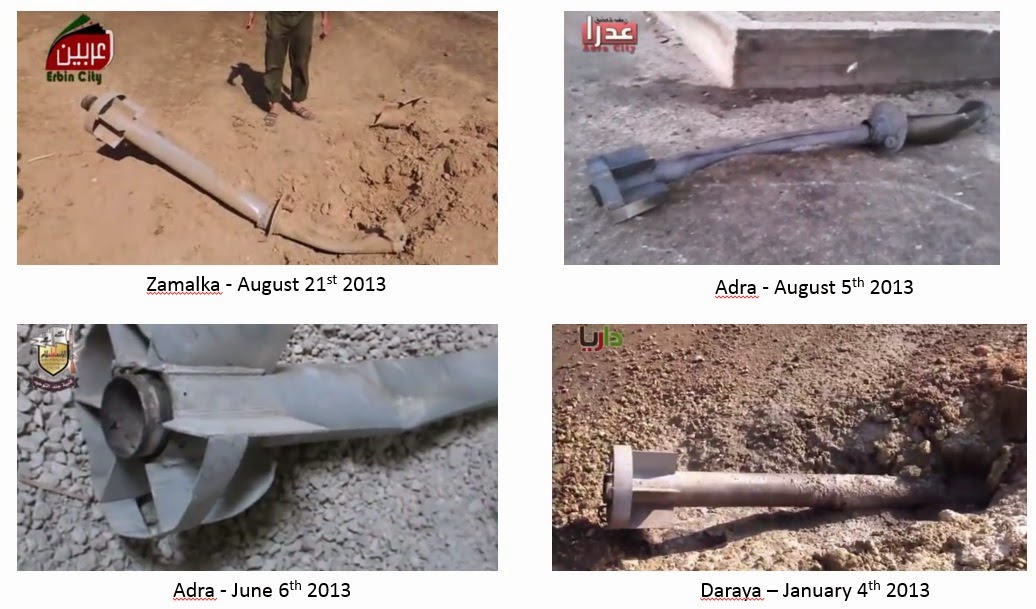 In all incidents, the rockets have exactly the same design, down to the small nut and bolt, and in three of the four incidents they are described as being chemical weapons. It's also been possible to establish there's multiple types of Volcano rockets, and that there are explosives types that have been used widely since at least late 2012.  They all follow the same basic principle, a conventional artillery rocket with the warhead removed and replaced with a much larger warhead, with a much reduced range, but much greater destructive capability.Videos posted on pro-government YouTube channels and Facebook pages, in particular the official pages of the Syrian National Defence Force, shows Volcano rockets in action, and confirms government forces have been using them for over a year.  The three main types of explosive Volcano rockets are shown below 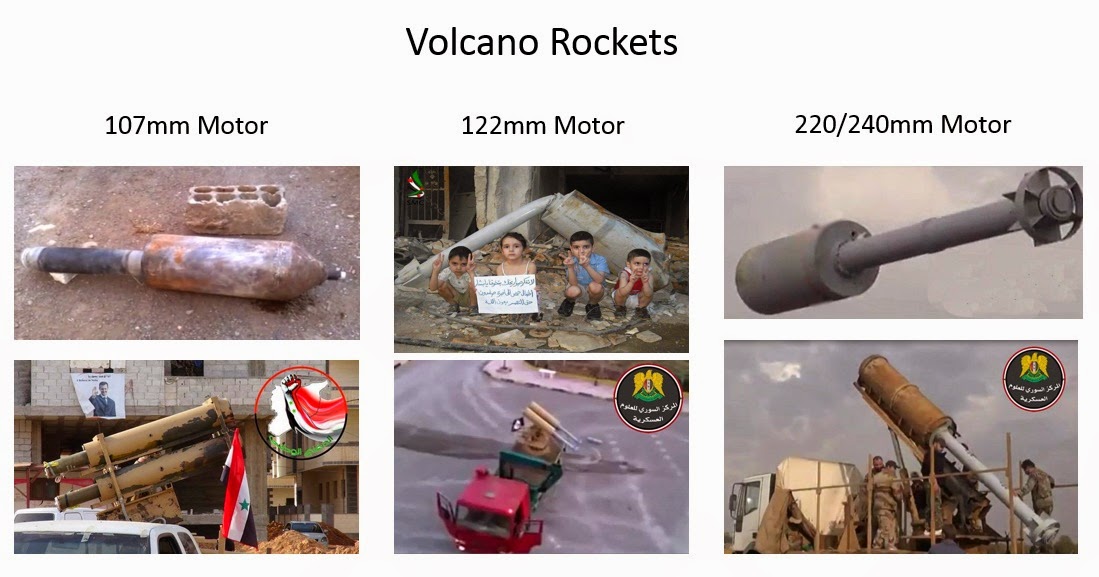 What's of particular interest is the 122mm motor based Volcano fired from the two barrelled launcher, shown in the above picture.  Multiple videos from the government controlled Mezzeh airbase, in southwest Damascus, show these launchers being used in late 2012, and later images and videos show the same type of Volcano rockets and their launchers being used by government forces.  It seems undeniable that the Syrian government has been using these types of Volcano rockets for over the year, and there's been no evidence of Syrian opposition forces capturing or using this type of Volcano rocket. The unexploded remains of the explosive type of 122mm Volcano rockets have also been recovered, and it's possible to compare these videos with the images of the remains of the chemical type of 122mm Volcano rocket.  The rocket sections of the explosive and chemical 122mm Volcano rockets appears to be identical, apart from markings, which on the chemical type are red numbers, and on the explosive types of black numbers.  This type of numbering can be seen on chemical and explosive versions from examples from different dates, and seems to strongly suggest the colour of the number denotes the type of munition, explosive or chemical.The warheads have similar dimensions, but are obviously different designs due to their differing payloads.  For example, both types have a port at the base of the warhead, but the chemical type has an additional port that appears to be used to fill the munition (shown on the left of the below image) 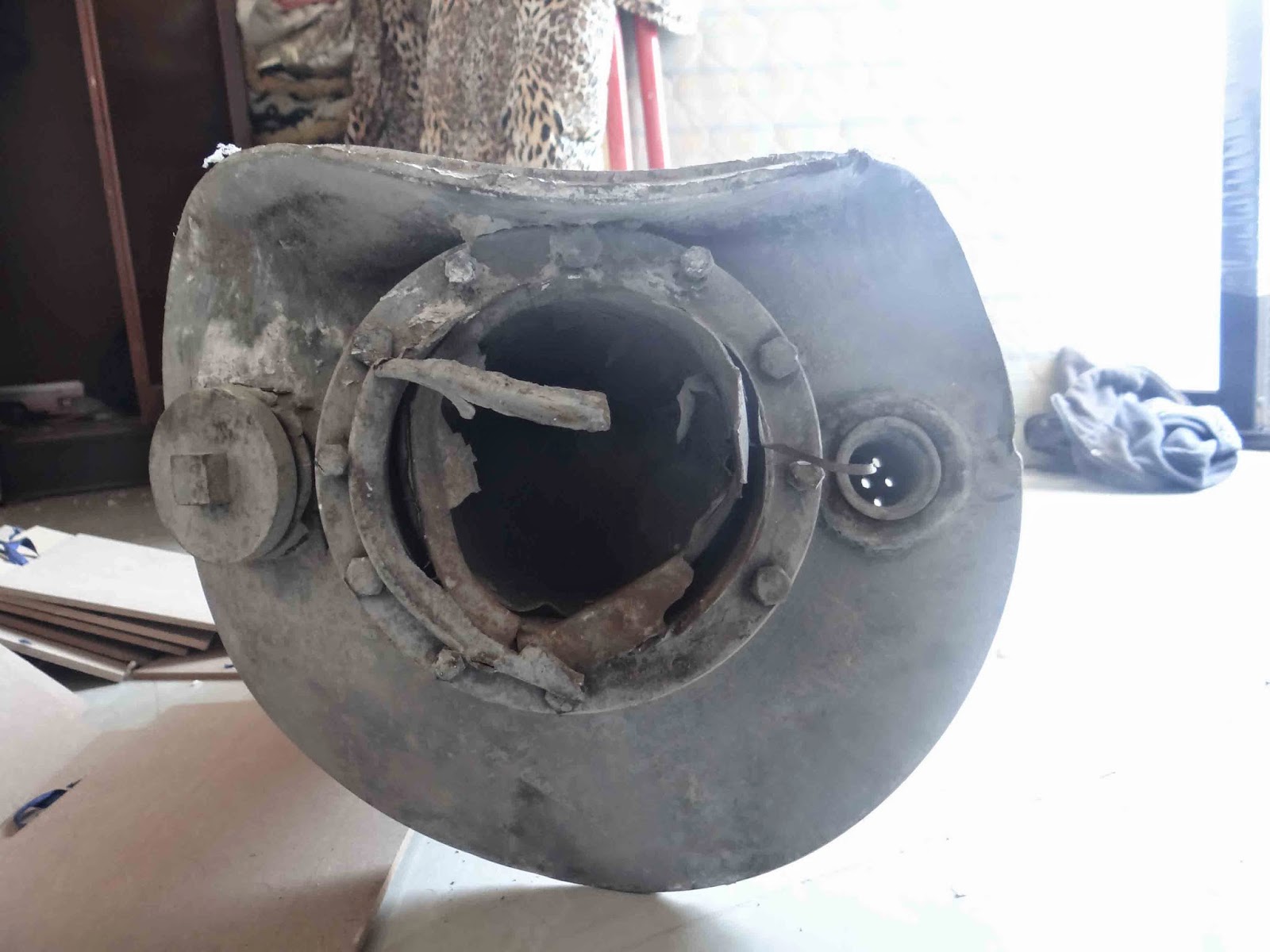 So, what does this have to do with Seymour Hersh's piece?  Well, it seems Hersh thinks nothing at all, as he fails to even acknowledge their existence in either of his pieces.  As I mentioned before, their use by the Syrian military totally destroys his argument in his earlier piece that their design suggests they are improvised munitions created by the Syrian opposition.  The fact the appear totally unique to the Syrian government's inventory would then suggest two things if the Turkish government had helped with a false flag attack on August 21st as per Hersh's narrative

It should also be kept in mind that the OPCW/UN team took samples from these rockets that points towards a binary type of Sarin being used, that would have been premixed before being poured into the warheads.  This is not something you can do in a bathtub, the combination of the two precursors would have produced not only Sarin, but dangerous by-products, including a powerful acid, and specialised equipment and safety procedures would have been required (more details on that here).  There's also a question of quantity; so far I've collected images of at least 8 Volcano rockets used on August 21st, and there are reports that over 12 Volcano rockets were used.  It's been calculated the warheads would have a capacity of 50-60 litres, making for at least 400 to 720 litres of the Sarin mixture.

Seymour Hersh fails to address how eight to twelve 2 meter long perfect copies of Volcano rockets were produced and transported from Turkey to Damascus, along with hundreds of litres of Sarin precursors, and the required equipment to mix it and pour it into the warheads.  When accusing the Turkish government of participating in a horrific chemical attack as the pretext to invading Syria, these sort of details aren't something that can just be hand-waved with "well, they could do anything if they put their mind to it", as some commentators have attempted.  The chemical Volcano rockets used on August 21st are a key piece of evidence, especially in the case of Seymour Hersh's latest accusations, so by not even acknowledging their existence, it seems Hersh is either ignorant of, or chooses to ignore, key information that is extremely significant to the narrative he's trying to construct.

Considering the seriousness of the charges he's making against the Turkish government, such an oversight seems highly irresponsible for a journalist of Hersh's reputation.
Posted by Tony at 7:15 AM