Qataris give ground in Gulf spat

Ian Black: Pro-Islamist Doha is quietly mending fences with Saudi Arabia and the UAE as Isis threat looms. It is not clear how deep the rapprochement will go. 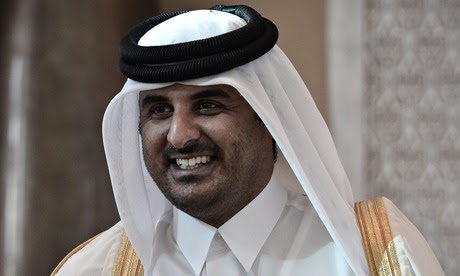 Qatar's Emir, Sheikh Tamim bin Hamad Al Thani. Photograph: Mohammed Al-Shaikh/AFP/Getty Images
Qatar, a satirical Middle Eastern website reported the other day, expressed "deep interest" in buying Scotland in the event of a "yes" vote in the independence referendum. The spoof story was a harmless dig at a small and wealthy country that owns a dazzling array of assets, has had a remarkable impact on the region and the world — and arouses very strong feelings, not least in its own backyard.
The Qataris have clearly noticed. Sheikh Tamim bin Hamad, the emir, is using a new and gentler tone on the issues that have generated almost non-stop controversy in recent months: on a visit to Berlin this week he admitted that there had been "errors and problems" over conditions for foreign workers since Qatar was awarded the 2022 World Cup. And he also flatly denied supporting the terrorists of the Islamic State (Isis) in Syria and Iraq - as critics have repeatedly charged.
Fear of Isis, amid US efforts to build a coalition to fight the jihadis, has brought changes of policy too. Anxious to end a long Gulf spat, Qatar bowed to pressure from Saudi Arabia and the UAE and agreed to expel senior leaders of the Egyptian Muslim Brotherhood and to rein in Al-Jazeera TV — tireless cheerleader of the uprisings of the Arab spring. In private the Qataris now say that they will not support the Brotherhood, but nor will they oppose it. It remains to be seen how - or whether - Al Jazeera's coverage will actually change.
Doha's long-standing backing for the MB has put it in the front line of an ugly regional cold war in which Abu Dhabi and Riyadh are the staunchest supporters of the Egyptian military — which ousted the Brotherhood's democratically-elected but deeply unpopular Mohamed Morsi last year. The confrontation plumbed new depths when UAE planes based in Egypt hit a Qatari-backed Libyan Islamist militia during fighting for Tripoli in August.
It is a conflict fought mostly through diplomatic arm-twisting, the media and expensive PR firms. Qatari sources have accused the Emiratis of using an obscure Norway-based NGO to investigate and embarrass them on human rights issues - while simultaneously bigging up the UAE's own unimpressive performance. Emirati media have been attacking Qatar's growing web of loyal media outlets. According to the New York Times, the records of a US consulting firm retained by the UAE "showed a pattern of conversations with journalists who subsequently wrote articles critical of Qatar's role in terrorist fund-raising."
For all its financial resources, communication has never been Qatar's strong point. Its response to a carefully-prepared report on its labour practices was an embarrassing fiasco. But in London the Qatari prime ministry is now represented by Portland Communications, one of the world's leading public affairs and strategic communications firms. Its other specialty, "reputation management," may well come in handy.
Doha has been especially vulnerable to the allegation that it supports Isis. It certainly promoted the MB in the anti-Assad opposition, and there was government and private financial support for often hardline Islamist fighters, some of who were radicalized on the ground and defected to other outfits. "There was a very thin line between where al-Qaida started and Ahrar al-Sham (another Islamist brigade) stopped," said Michael Stephens of the RUSI thinktank. "That was the Qataris' problem." The Saudis, of course, supported the same kind of rebels.
Still, Qatar's connections had their uses: Doha has carved out a niche as a broker of deals with groups shunned by the west. In August it helped secure the release of the American journalist Peter Theo Curtis by Jabhat al-Nusra, an al-Qaida affiliate in Syria said to have links to Qatar. That was a painfully striking contrast with the fate of the two other journalists beheaded by Isis. Qatar was also involved in the swap of five Guantanamo Bay Taliban detainees for the US army Sergeant Bowe Bergdahl and granted a safe haven to the Afghans.
If the hostility of its Arab neighbours was not enough, the Qataris have also attracted the ire of Israel in recent months because of their support for Hamas in Gaza and are now facing organized protests over the already troubled World Cup.
It's no surprise that they are feeling the heat. "The Isis issue is partly propaganda put out by the Gulf neighbours, primarily the Emiratis, and by the Israelis because of Hamas," says a well-placed Arab observer. "But you really need to distinguish between the two. If you are fighting Isis you can't also fight the Brotherhood and put them in the same basket."
Change is taking pace. "The Qataris are shifting very quietly," argues Kristian Coates Ulrichsen, author of a forthcoming book about Qatar and the Arab spring. "They are under intense pressure from within the Gulf. They want to save face and don't want to be seen be to backing down under external pressure. They won't do that publicly but they are being quieter about how they shuffle the cards."
Posted by Tony at 4:14 AM