All over the world, the challenge to the old order is growing 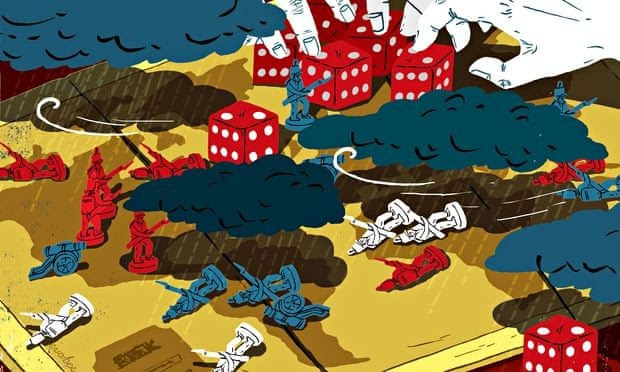 A decade and a half into the 21st century, we’re still living through the aftermath of two epoch-making shocks. The first was the demonstration of the limits of US power in the killing fields of Afghanistan and Iraq – the war on terror that broke the spell of invincibility of the world’s first truly global empire. The second was the financial crash of 2008 and the crisis of the western-dominated economic system it unleashed, still playing havoc with economies and lives across the world more than six years later.
That crisis will shape politics in Europe in 2015, from London to Madrid. But the impact will be felt first in Athens. The slump and stagnation that followed the crash has already fuelled the rise of the populist right. Now, after years of self-defeating austerity and falling living standards, the radical left has leapfrogged ahead to challenge for power in the most devastated eurozone economies ofGreece and Spain.
It was a backlash waiting to happen. In Greece the leftwing Syriza party, which rejects the austerity enforced across the eurozone by its unelected troika, is favourite to win the snap elections called for the end of January. Syriza may have stepped back from its one-time demand for unilateral debt cancellation, its programme to boost living standards in the wake of a 1930s-style depression may be modest, and mainstream voices across Europe may also be calling for a change of direction. But Europe’s governing elites will have none of it.
Expect a ferocious campaign to terrify Greek voters, who have already beenwarned by the European commission’s Jean-Claude Juncker not to vote the “wrong” way. If Greeks still insist on making their own democratic choice,everything will be done to force Syriza to retreat. If all else fails, Greece will be punished for fear that others, such as Spain’s new Podemos party, might go down the same route later in the year.
The powers that be in Europe are determined to prop up a failed economic model regardless of the cost – as they will be in Britain if Labour wins the general election in May. The aftershocks of the breakdown of that neoliberal regime are still being felt across the world economy – in falling commodity prices, capital flight, stagnation and recession. But the interests that depend on it won’t let go without a serious challenge.
Advertisement
That’s just as true in terms of global power. The US and its satellites, including Britain, may have suffered a strategic defeat in Iraq and Afghanistan – symbolised by last weekend’s ceremony to mark the end of Nato’s combat mission, held in secret for fear of Taliban attacks. But they’re not letting go either. Some 13,000 troops are staying on as “trainers”, just as thousands of western troops have been returning to Iraq for the war against Isis – the al-Qaida breakaway spawned by their own invasion and occupation – with talk of a major assault in the spring.
In the same spirit, every effort was made at the time of the Arab uprisings of 2011 to hijack, control or crush them. Some of the results can be seen today in the disaster zone across the Middle East, the growing power of the western-backed autocracies of the Gulf, the brutality of Egypt’s new dictatorship and the maelstrom in post-intervention Libya, whose civil war is likely to intensify in the coming months.
Meanwhile, Russia’s challenge to untrammelled US strategic power, which began in Georgia in 2008 and intensified through Syria’s proxy war, has come to a head in the conflict in Ukraine. There has been much western crowing in recent weeks that the combination of collapsing oil prices with US and EU sanctions has plunged Russia into recession, while knocking chunks out of the economies of other independent oil states such as Iran and Venezuela into the bargain. It seems clear enough that the Saudi regime’s decision to boost oil output when prices were already falling was designed not only to protect market share and undercut fracking, but to punish Iran and Russia for their role in the Middle East and Europe to the benefit of Riyadh’s US sponsor.
It is a form of economic warfare – hailed by President Obama this week as the fruit of “strategic patience” – the consequences of which will be felt across the world in the months to come. But along with the global power and economic shocks of the past decade, two other crucial shifts have defined the early 21st century: the economic rise of China, in defiance of market orthodoxy, and the tide of progressive change that has swept Latin America, opening up alternatives to neoliberal capitalism.
Both have continued despite the backwash from the crash, which has taken its toll on the “Brics” countries and the wider global south. Progressive governments have carried on being elected from Bolivia to Brazil, while China’s slowing growth rate is still almost double that delivered by the US recovery. Political and financial pressure on Venezuela, which has been crucial to Latin America’s transformation and already faces serious economic problems, however, looks set to increase in the coming year. The key to riding the storm, as elsewhere, will be who is made to shoulder the burden of falling income and reform.
What seems certain though is that, however much the west tries to recapture lost ground, the global order will not revert to the status quo ante. There may be growing conflict, but there will be no return to unchallenged US diktat or uncontested economic catechisms. Alternative centres of power are forming. Both internationally and domestically, the old order is coming apart. The question will be what replaces it.