After a solid week of fighting over the Sahl al-Ghab plain, just west of the Idlib Province, Syria’s military has carried out a retreat to a position even closer to the Alawite heartland that lies of the western side of the area, as al-Qaeda masses more gains. 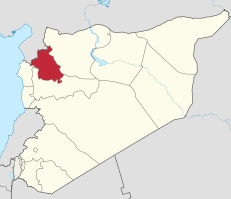 The recent al-Qaeda gains gave them the high ground on the eastern side of the plain, and Syrian Army officials say they had no choice but to fall back to avoid being exposed to artillery and missile fire, establishing the defensive line further back.
A newly announced 48-hour ceasefire in Idlib Province may allow the Syrian military to reinforce its defensive line, but it may also allow al-Qaeda to move some of its own fighters, who have been surrounding Alawite villages there, onto the plain to press the advantage.
Al-Qaeda and other rebel factions have made pushes against the Alawite homeland in Latakia Province in the past, but have always been repelled by the military. The Syrian military seems to be in somewhat rougher shape this time around, however, and may not hold out as well.
Posted by Tony at 7:53 AM